MANCAT MONDAY: DANTE DOES HIS BEST!

Mancats try their very hardest to do what they think is right, but sometimes it's just not possible.  They don't really ever give up, but instead they reset their goals for another day. 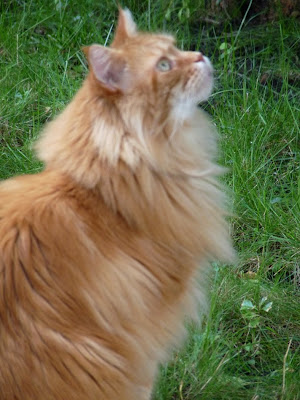 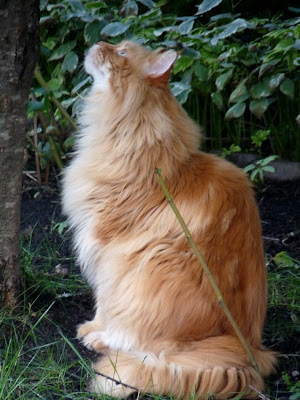 He's identified his target and is trying to intimidate it. 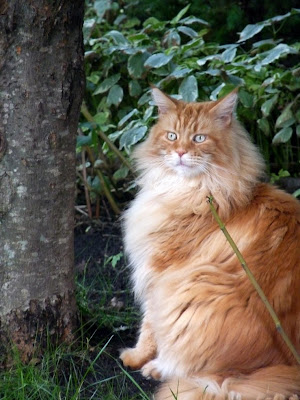 When that doesn't work, he takes a moment to regroup (even though he's all by himself). 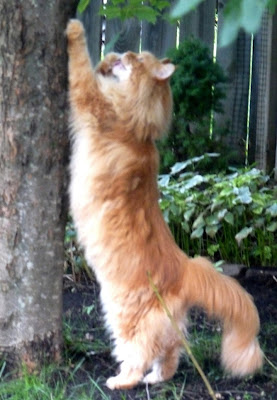 Dante decides to show his teeth to his target and lick his chops.  He says "Get in mai belleh!" 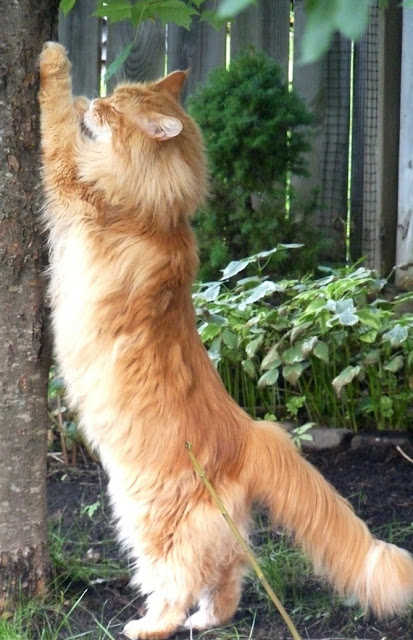 When the direct approach doesn't work either, Dante says a little PREYer.  But still it's a 'no go'. 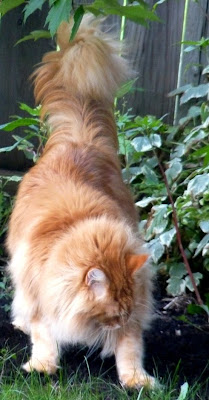 PURRhaps a dance will entice the stubborn thing. 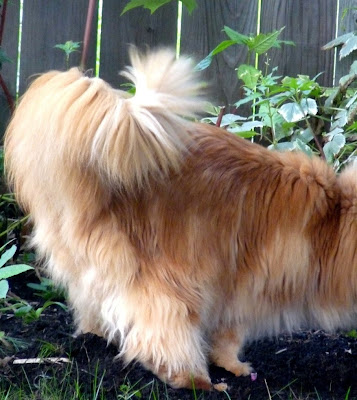 A swish of his mighty tail might attract it! 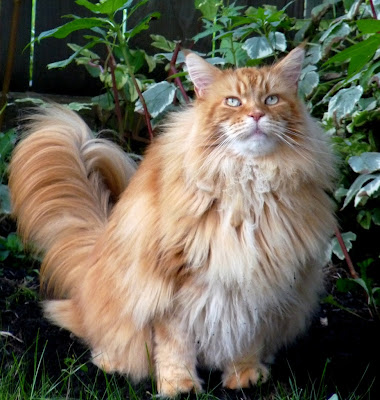 In a last ditch effort (he dug himself a little ditch to sit in), Dante summons all of his mental powers to will the thing down from the tree. 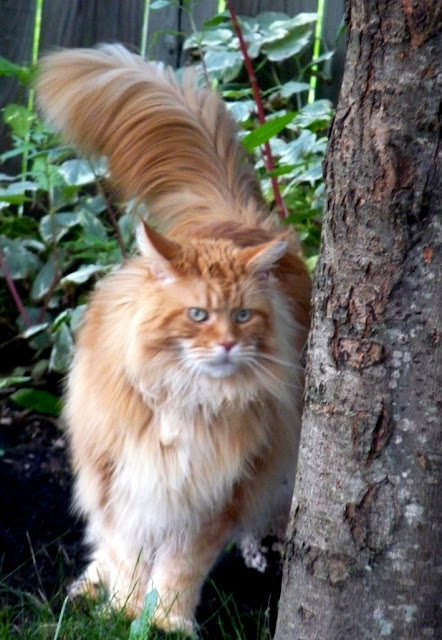 Finally, Dante realizes he has to make a better plan and set his sights on tomorrow.  With that, he walks away with his tail held high and his dignity intact (do you think?).

When your best instincts fail you, you must look at the problem from a different PURRspective.

After all, a temPURRary failure is only one step on the ladder to success!

P.S.  One of the commenters suggested that Dante go after easier prey.  Well, although I did not get a picture of it, he did just that last Friday.

I had a nap on the couch and when I woke up, Dante was there beside me, poking at a SNAKE!

Fortunately, I maintained my calm, fetched a container and scooped it inside while Dante was still intimidating it.  It was a small garter snake, who is happily living outside once again, after I let it go (much to Dante's chagrin).  Foiled again!
Posted by CCL Wendy at 9:57 AM

Maybe Dante needs to try for different prey. Was it the evil chipmunk again? The squirrel? They're cagey! LOL.

Dante--what did you see up there? It was looking so interesting.

You always look dignified, no matter what you do, Dante. And you cornered a snake? You are the bravest mancat we know!

That silly birdy, I'm surprised it didn't succumb to the power if Dante's thoughts and invitation to visit his belly - LOL!

Dante, were those evil squirrel introoders bothering you again - they are so mean to taunt you - but then again, we think that you just humor them because in reality you don't want to catch them - you just like to play with them. We bet if you really wanted to you would have them right away!

We would love a snake, but we know our Mom wouldn't! Good job hunting for your Mom, Dante!

Me and Mommy think you took JUST the right approach and we loved seeing all the steps you went through. You were faultless! I bet that was a stubborn ol' squirrel up there who just wouldn't cooperate! YOu look like a very intimidating lion by the way. I am a helpless little Lady Cat.

Dante, you look like a great hunter! I used to hunt all the time, but not usually up in trees. Garter snakes are lots of fun to play with, but my Mom always took them away from me too. These days I only hunt the food that's in my bowl. Keep up the good work, Dante!

(Mom just spent the last 15 minutes oowing and ahhing over your floofiness.)

Grrrr! We hate stuff that will not willingly be caught, and dedded. It's frustrating!

MOL about the snake! Thank goodness it wasn't a venomous one.

Dante...mommy said I may answer your kind inquiry.

My name here in my home is Lady Bianca. I took the name of the Admiral because of the tiny Admiral's hat I am wearing in my profile picture. Mom and her human sons call me the Admiral more than my name now.

The Admiral's hat picture came about when I was running for and won the title and position of President of North America. The Entire Continent. I rule benevolently and this happened on my mommy's blog last year early. We have a doggy Vice President too.

Dante is the most beautiful mancat we have ever seen=his gorgeous floof just overwhelms us and makes us swoon :)...He needs to stay away from snakes though; Mommy had a kitty (Jax/Mommy Cat and Daddy Cat's son=2001-2007) who was bit by a snake in August 2005 and it took a blood transfusion from Daddy Cat, a week at the vet and another month inside for him to recover; and he got to the vet just in time, otherwise, he would have died...Stay safe, sweet friend...kisses...Calle, Halle, Sukki

EEEEK!! Dante!! You stay away from those snakes!!!

Thank goodness we don't have snakes near to where we live mum would totally freak out. We loved the pictures of you hugging that great big tree.

What a Magnificent, Magnanimous, Marvelvous, Manly Mancat is Dante!

U R the George Clooney of cats!

MeWowZa...you are quite a stupendous mancat! Your tail furrs could make about 4 of us CRexes! Not that we'd steal them or anything!