Dante is a tabby cat with orange tabby stripes.  They are difficult to purrceive on the parts of him that are swathed in layers of long and luscious fur, but they are indeed there.

Do a tabby's stripes speak to his heritage as a striped wildcat?  And what wilder cat is there than a tiger?  I think there is a bit of tiger in all domesticated kitties.

And then there's the lion -- King of all Cats!  Dante also has traces of lion in him, not the least of which is his flowing main.  Even dressed, that mane cannot be contained.  And neither can the leonine instincts that still linger in our pampered pussycats. 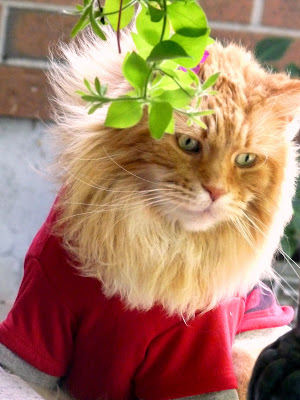 Here you can detect Dante's telltale tabby "M" on his forehead.
And his mane is free and flowing all around his head.
Are these the vestiges of a lion or a tiger? 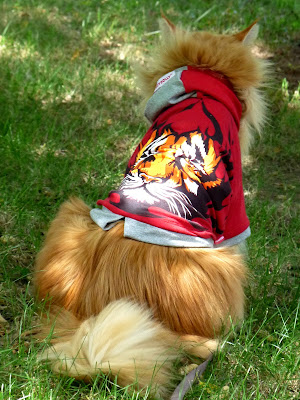 Dante is sporting the latest addition to his wardrobe -- a fiery
Tiger T! 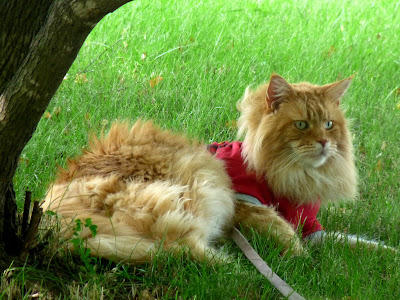 But lying down in jungle grasses, Dante looks much more lion-like, here.  Of course, this is a suburban jungle, and Dante's on a leash. 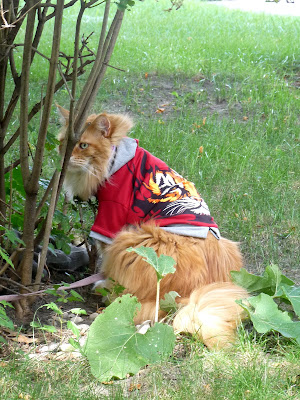 Both the lion and the tiger in him sense that prey is near. 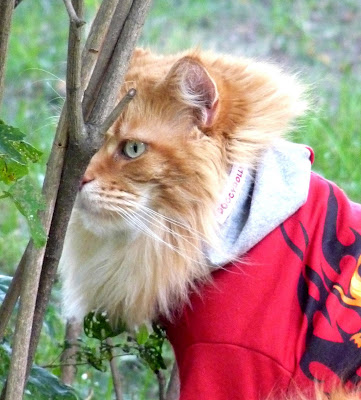 And the pupils widen his steely wildcat gaze. 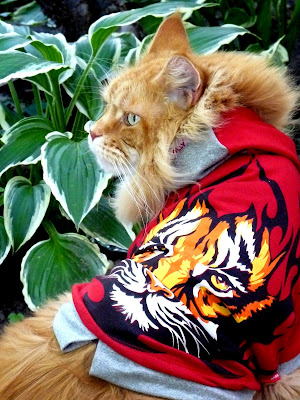 Here lion meets tiger with Dante's mane touching the tiger's face -- symbolic of the synthesis that he is. 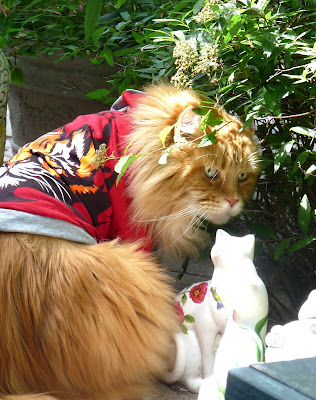 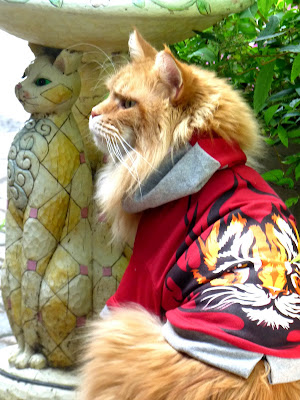 (Biggify for full effect)
So what do you think?  Is Dante more lion or tiger?  Or both?
Posted by CCL Wendy at 9:25 AM

We're loving the tiger top Dnate. We think there's a little of both in every cat!

It's very hard, you make good arguments for both!

Yes I see the "M" on Dante's forehead, but that mane is a force to be reckoned with...therefore my vote has to go to LION!

You look so very regal, Dante, so we have to vote for lion. xxxxxxxxxxx

Dante, I think you are the king of kings--no matter how you look at it!

We think Dante is a bit of both - tiger stripes and lion mane - what are those - Ligers, which are part lion part tiger! We think he is cute either way (and especially in his cute hoodie!)

We think he's a Liger! MOL!

Handsome Dante - My vote is lion ! By the way, your mane is something else !

You're an amazing example of all types of felines, Dante!

Your photos show you 'dressed to impress' and wow, do you! We heard a few snorts from Teri too, hahameow!

Dante, you are FIERCE.

I think you are a Tigerlion ;)

Oh, no doubt about it...LION! Dante has an incredible coat. Scouty is hoping his Winter fur comes in like Dante's...he kinda considers Dante his Role Model. Even though Scouty is half his size...a Cat's gotta dream!

We think he is the best of both=Dante is an amazingly gorgeous boy...We are always impressed with him when we visit=we all have a big crush!!:blushing:...kisses...Calle, Halle, Sukki

He is surely a LIGER!

We like that term...suburban lion! That's how we think of you, Dante! And we love your tiger shirt!!

Whether he is a lion or a tiger doesn't matter - he's very handsome anyways.