DANTE AT THE OLYMPICS: KEEPING US IN THE LOOP!

Dante is one of the Canadian competitors in the Biathlon at the Sochi Winter Olympics.  He is competing in the 'Men's PURRsuit'.

"The word biathlon is of Greek origin and means “two tests”.  In this case, the two tests are skiing and shooting.  The sport has its roots in snow-covered Scandinavia where an important survival skill was the ability to hunt on skis with a rifle slung over the shoulder.

Biathlon would make its official Olympic debut at the 1960 Winter Games in Squaw Valley.  Women would compete in Olympic biathlon for the first time at Albertville 1992.  There are now five events each for men and women as well as a mixed relay which will make its debut at Sochi 2014.

The men's event is 12.5km while the women's event is 10km. This event features the top 60 biathletes from the sprint starting at intervals based on their finishing order and times behind the winner of the sprint race. Essentially everyone chases, or pursues, the sprint gold medallist. There are four rounds of shooting, the first two in prone position and the last two in standing position, separated by five laps of a 2.5km loop for men and a 2km loop for women. The punishment for missed shots is to ski the 150m penalty loop. The first competitor to cross the finish line is the winner."  (from the Canadian Olympic Team Official website) 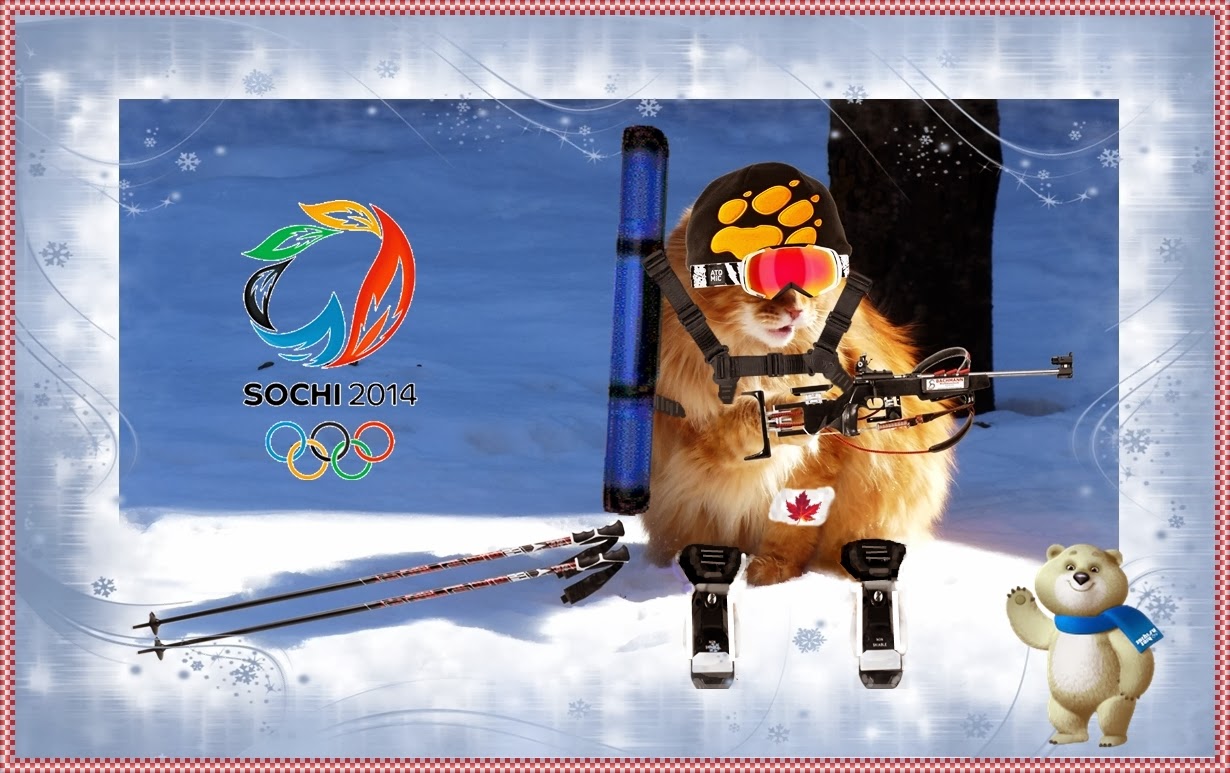 Here is Dante 'in the loop' at the Sochi Olympics.  He has a rather unique one-pawed technique for shooting his rifle.  It obviously works for him because he's one of the top biCAThletes in Canada. 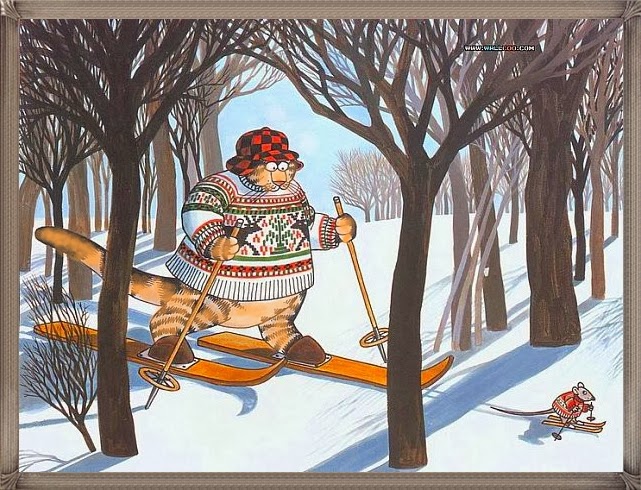 Dante first started to cross-country ski in PURRsuit of non-hibernating rodents.  However, they proved to be a little too quick for him. 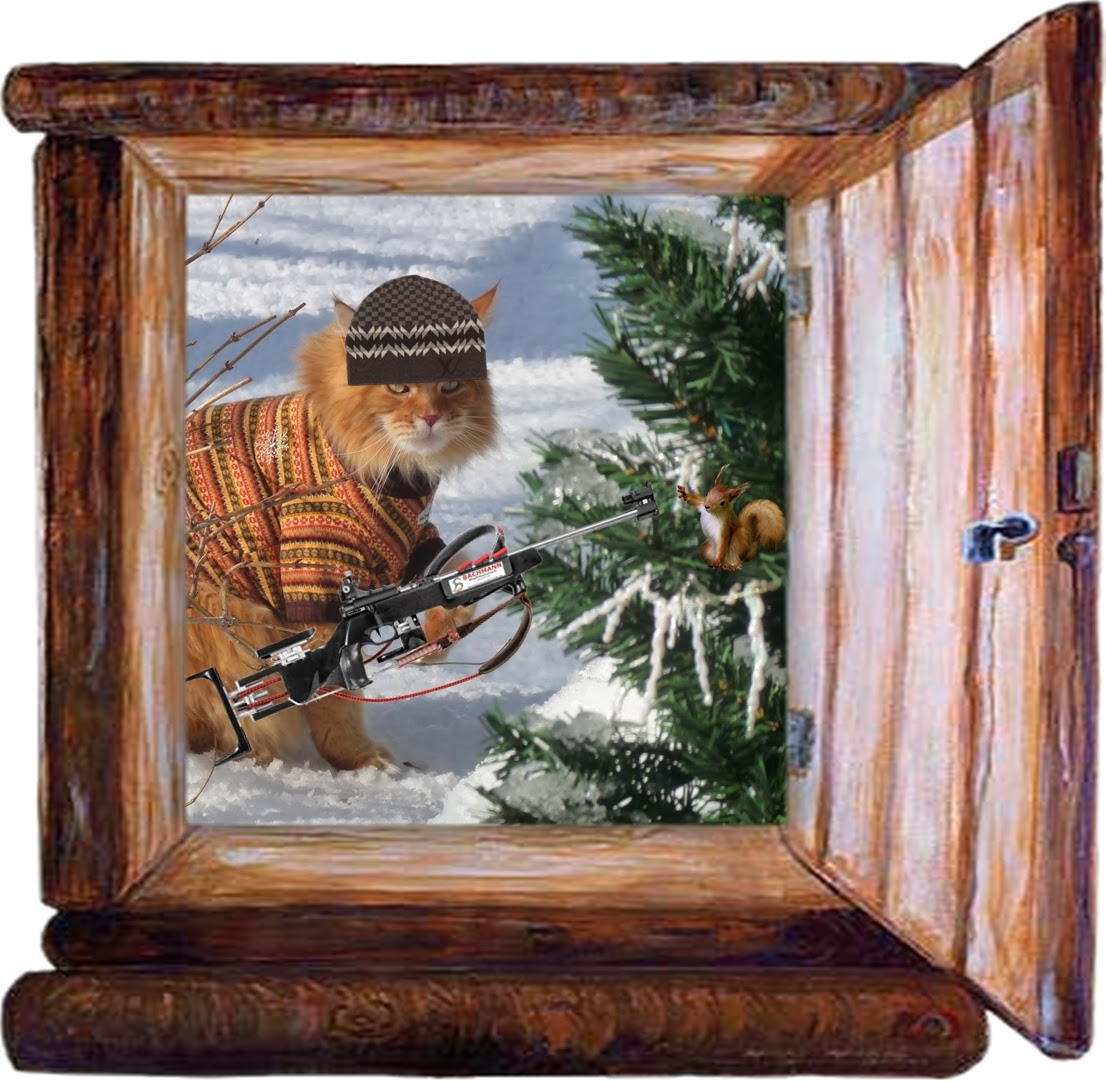 So he took up shooting because he thought it would slow them down.  The squirrels were none too happy to be used for target practice, let me tell you.  However, Dante was such a bad shot, initially, that no rodent was physically harmed in the PURRocess (although he almost frightened them to death, and the mental trauma lingered for some time to come).

So the local squirrel population took to the tops of the trees to stay out of  Dante's sights.  'Out of sight, out of mind', they hoped.

Meanwhile Dante was happily improving both his cross-country skiing and shooting skills. 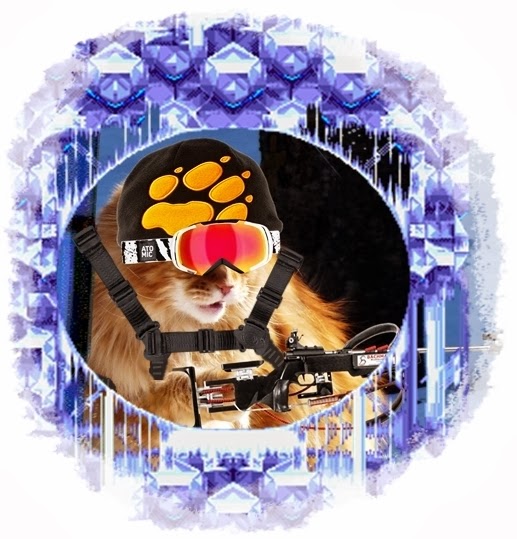 You'll just have to wait to see his Olympic results, though, because he's still 'in the loop'!

P.S.  If you'd like to see Dante's brother, Dylan in the Alpine Skiing Event and his sister, Domino in the Ladies Figure Skating competition, just go to Wendy's 3-D Cats.