THE CATURDAY BEFORE CHRISTMAS WITH DANTE

Christmas is less than a week away now, but Dante has been allowed to open one of his presents early. Just look at his new Christmas sweater! Isn't it a beautiful colour? 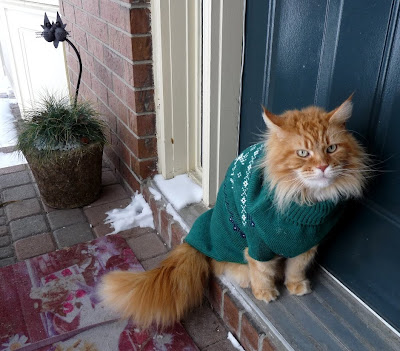 Dante actually likes his sweater and will even wear it indoors. What he isn't liking at the moment is the cold temperatures outside. We've been in a bit of a deep freeze lately. 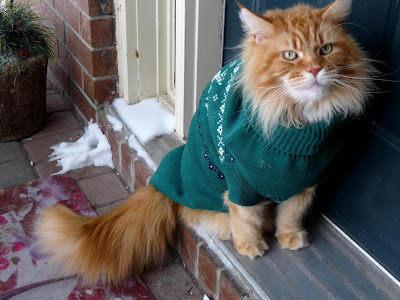 Dante actually doesn't mind the snow at all, as we've shown earlier this week. Here he is coming back from a short walk with Daddy. We put on his scarf for a little extra added warmth. It's actually funny how much smaller Dante looks when his floofiness is all covered up and encased in wool. 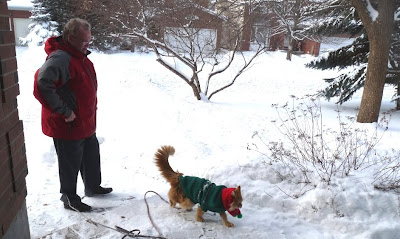 As soon as he could, Dante headed back to the doorstep to make sure I get the idea to open the door and let him in. I wasn't quite finished with my photoshoot yet, though. 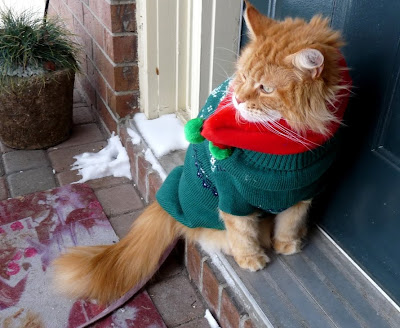 So, poor baby had to be patient and wait for mommy to finish! By the way you may notice this strange cat sculpture and plant in the background. These are both courtesy of my good friend Debbie. The cat was last year's Christmas gift, and the plant (which Walter calls a "giant Chia pet") was this year's Christmas gift. Apparently, this plant, which is basically grasses, is encased in cement which keeps it alive in any kind of weather, with little or no moisture (just like a Chia pet!). It is supposed to stay outside all year long, and is dormant at the moment, but will become very green and lush when spring arrives again. Cool, huh? 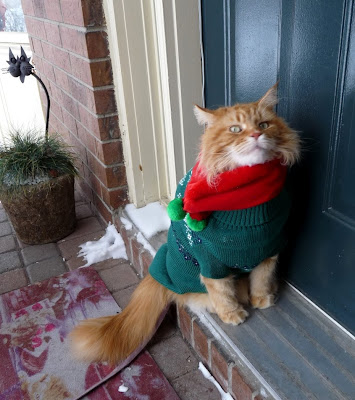 Daddy took a picture of the back of Dante's new sweater so everyone could see the lovely reindeer and Christmas tree pattern. 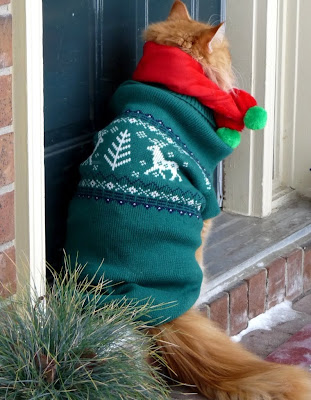 Here's a close-up of Dante in his red scarf, looking rather sauve, I think. 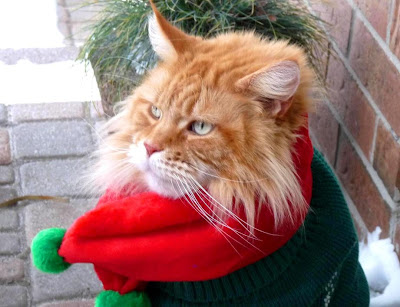 Dressed like this, he could pass as one of Santa's elves!!! 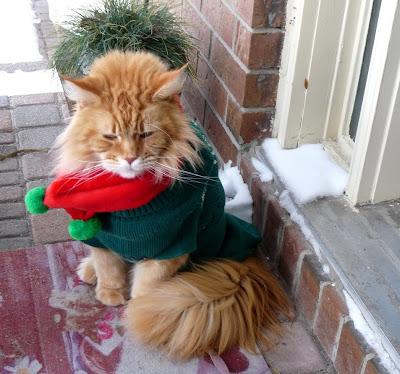 Finally, with this last plaintive look, I succumbed to pressure and let Dante back in the house. He had been extremely patient and I let him know what a good boy he was and how much I love him. He always gets lots of hugs and kisses while taking off the apparel.

That begs the question, does this qualify as "gay apparel"? 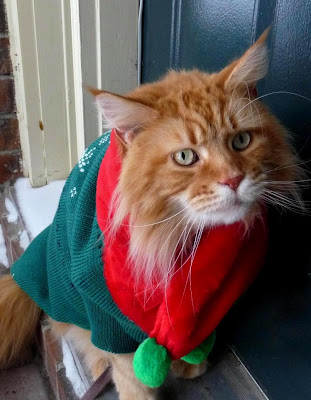 If so, I guess we could change the lyrics of the classic carol "Deck the Halls" for Dante as follows:

And they had the last laugh, together! Troll and Maine Coon were one in spirit -- and nice and toasty warm, to boot!
Posted by CCL Wendy at 10:11 PM

MOL! we love the song as well as Dante's scarf and new sweater!

Dante looks fabulous in his sweater and scarf! We love them! And we think it is very sensible in cold weather to wrap up warm! Mom said: Dante is ADORABLE!

Dante looks very smart in his sweater and scarf. He must be toasty warm.

I'm feeling the Christmas spirit with Dante! Falalalalalala!!! He's such a good sPURRt!

Dante looks so sophisticated in his sweater and scarf! Love the song too!!!

I like your sweater, Dante. But, I've decided I need BOOTS! I don't like the snows, they make my feet wet and cold so I'm staying inside until they go away.

We loved your song; Dante looks so handsome in his sweater, but goodness he can really look sad when he wants something, doesn't he?

We don't know about gay, but we do know he looks very happy wearing his sweater and scarf. That's the most important thing. Also very nice that he could have this present early, he can really use it now.
And we really love the cat sculpture.

Dante certainly does look absolutely suave and manly in his scarf and sweater. Baby is swooning.

Dante looks quite handsome and festive in his Christmas Sweater!!

What a wonderful post!
Love the sweater,
Love the song,
Love Dante!

I love Dante and his outfits! His little look was just precious too. Ah, to have such a boy in your life, what a blessing :D

Oh, my dearest, come to me and I will wrap you in my white PURRfection to keep you warm.

Dante looks great in anything he wears! I love the new lyrics to the song...fantastic!

Wonderful!!! {clap, clap, clap} I love the jolly take on the old song and Dante's great facial expressions of patience. Have a warm and happy holiday!
~Lisa Co9T