I noticed another development in Dante's facial appearance just the other day.  The fur flowing from his cheek area was becoming more pronounced and pointed.  Take a look. 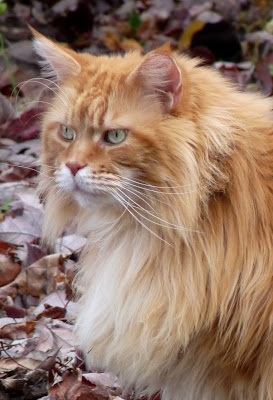 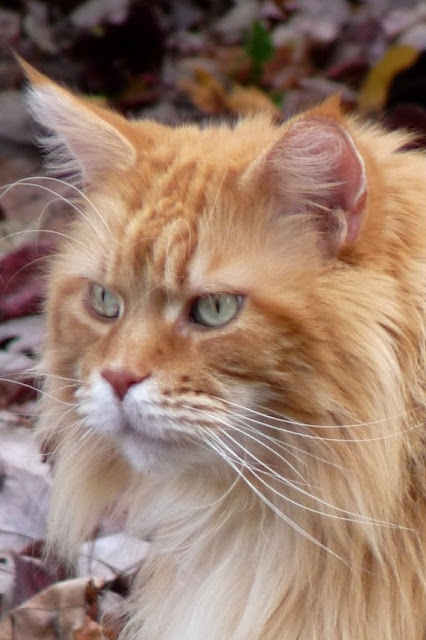 It's like these points of fur were separating from the rest of his mane and now he looked much more lynx than lion!

So, I did some comparison shots. 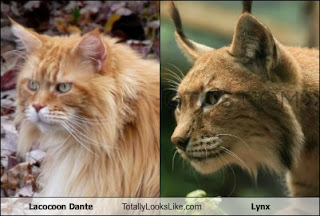 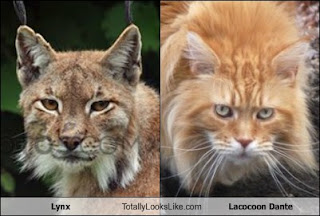 Maine Coons evolved from European cats that were brought over by early settlers, but there has been a long held myth (apparently genetically impossible) that they mated with wildcats, like the lynx.  However, between the cheek tufts and the ear tufts, it's otherwise tuft to explain.

Now, most folks think Dante looks like a lion, and I would agree there are significant similarities there, too. 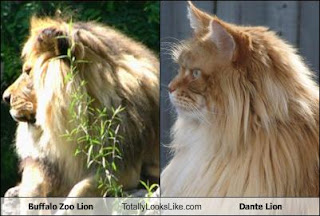 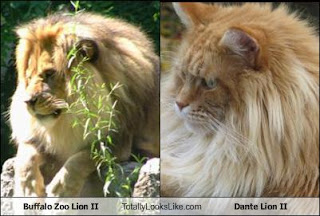 So what do you think?  Is Dante a lion, a lynx or something in-between?  Perhaps even the 'missing lynx' of the feline variety? 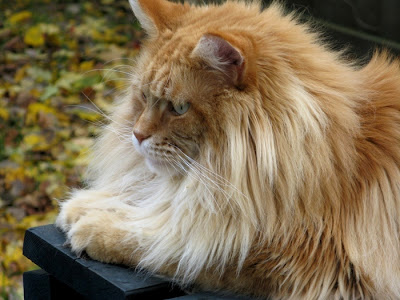 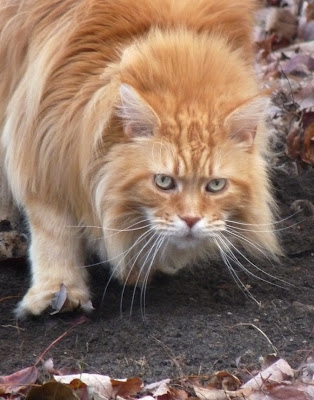 Lynxified Dante
Maybe Dante's a whole new species.
A 'lynxion' PURRhaps?
What say you?
Posted by CCL Wendy at 10:13 AM

Missing Lynx of the Dante variety! I'm almost sorry you gave that as a choice because I thought I was clever for thinking about it and going to write it before I read you already had. :-)))

Hmm. Me don't knows if yous is a Lynx or a Lion. Yous is beauteous! Me would loves to snuggle into all that furs!
Kisses
Nellie

I think Dante is whatever he wants to be! Although I'm leaning on lion!

I think I fell a little bit more in love with your kitty.. such a handsome beast.

We think you're a gorgeous "wild" mancat, Dante, no matter whether lion or lynx. Purrhaps you can be lion one day and lynx the next! :-)

We think Dante is a combination of both!! And very handsome!!

Oh my cod! He is the most beautiful cat I've seen, either way I love him! We are just breathless here and we had to wipe the drool away so we wouldn't short out the keyboard. The girl kitties are limp pools on the floor. Felion Dantimaximus Rex, we bow before you!

I think he looks like a well to do Victorian kitty with fancy muttonchops!

I can't thank you enough for sharing these delightful pictures of Dante. He has to be the fluffiest Maine Coon I have ever seen.

I would most definitely say- Lynx or Lion. He reminds me of both facially. He has a LOT more thick body fur than either the Lynx or the Lion though. I'm sure he is the KING of the beasts in your neighborhood.

Oh Dante, you are the finest lynxion ever! Cool post.

What an awesome cat! So dignified - so beautiful. The lynx and lion comparisons are amazing.