Dante received this award from "Twinkletoe Tales".  It's not often that he gets an award all by himself (more commonly along with his brother and sister), so thank you very much to Oui Oui and her furbling cohorts. 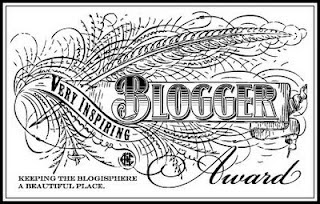 Apparently, once you get this award you are supposed to tell seven -- count 'em seven -- things about the awardee.  So here goes: 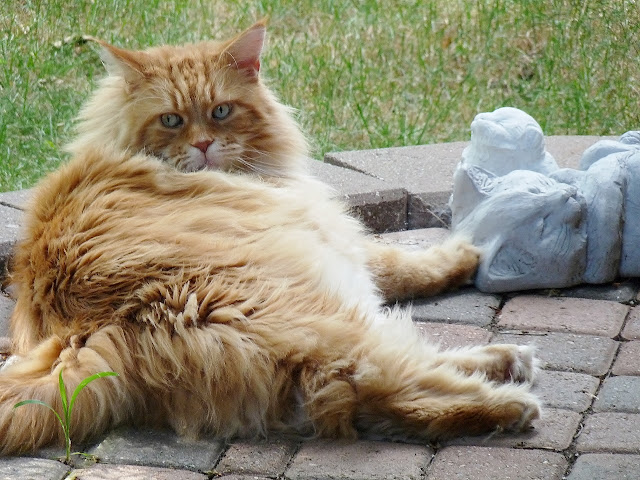 3.  Dante has a sweet little lip that he just loves to have kissed.  Wanna smooch? 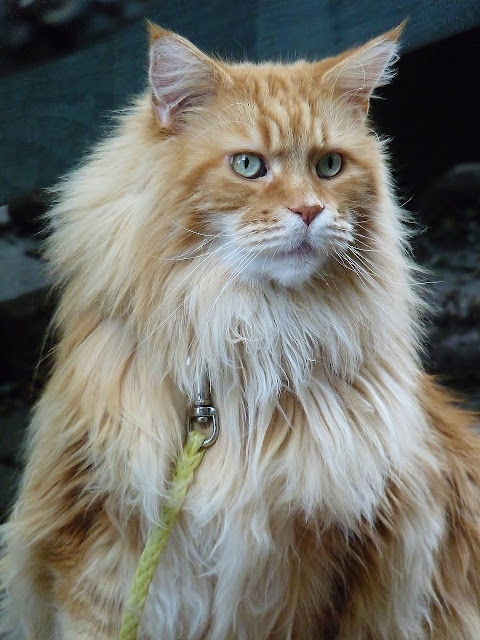 He will raise his face to anyone to give them a kiss.  Although he can't actually pucker, he still likes to touch lips.  The following pictures show Dante kissing a couple of our guests with whom he is not overly familiar.  Dante is an equal opportunity kisser. 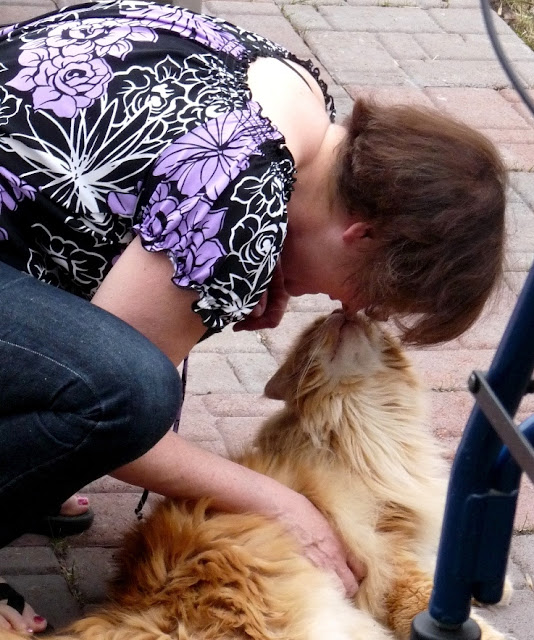 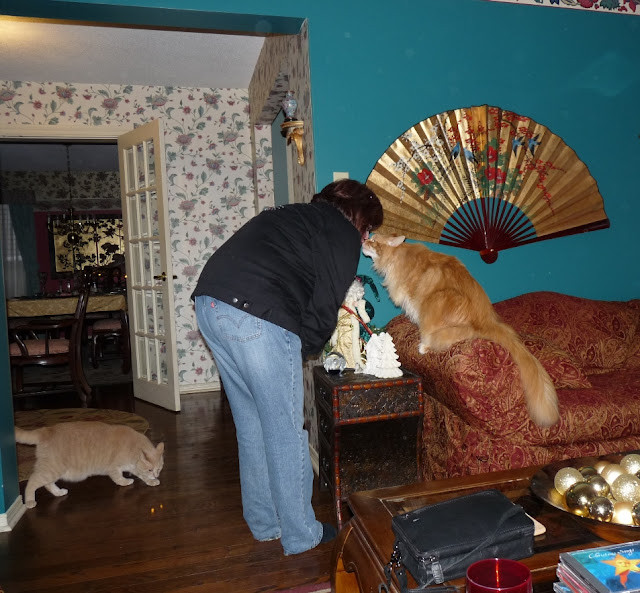 4.  Dante is very sociable and likes to join us when we have company for dinner.  Typically he sits near me on one of the side chairs and waits for something to eat.  Sometimes he will even dress for dinner if it's a special occasion -- like at Christmas! 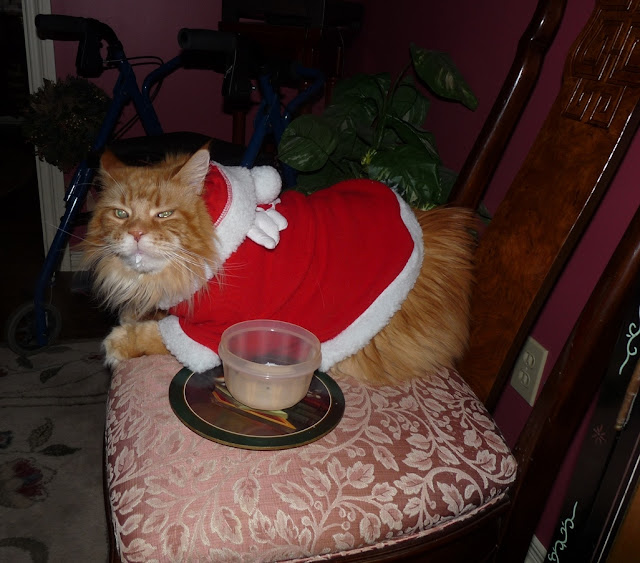 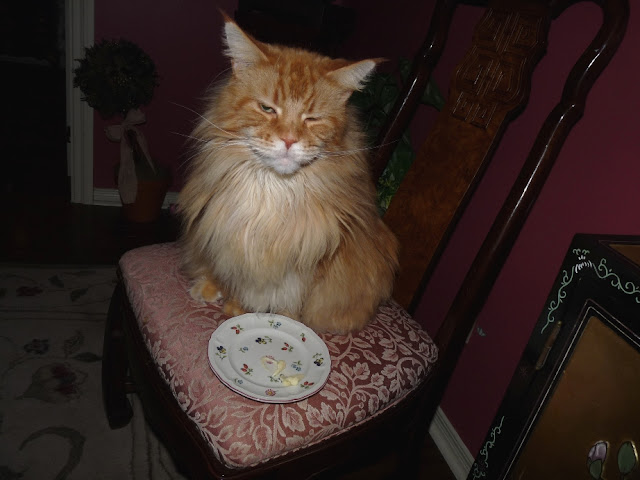 Dante just loves when someone butters him up! 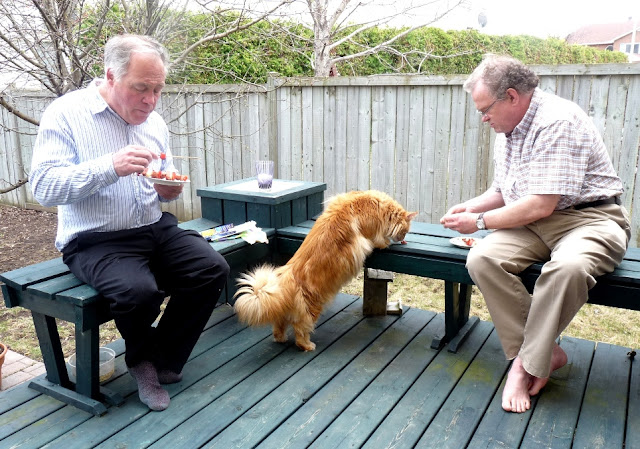 Even dining al fresco, Dante likes to get into the mix!

5.  Dante will sometimes eat with his paws. 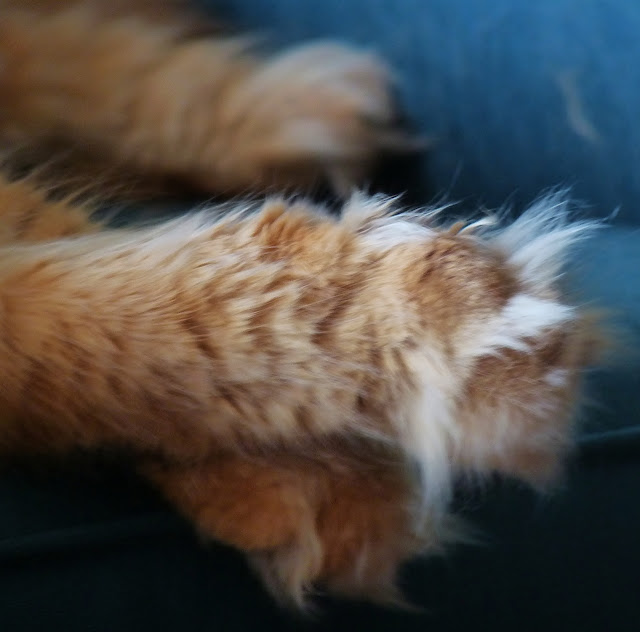 Instead of putting his face in the bowl of kibble, Dante will fish out pieces with his paw and put them in his mouth.  Dante's kibble is actually Maine Coon sized, so it is easier to pick up than the more typical fare (although he tries that, too).  If I give him pieces of meat -- like HAM or chickHEN -- he will also pick it up with his paw and place it in his mouth.  I believe his claws play an essential part in this.  Sometimes, if it's a particularly large piece of meat, he will then carry it in his mouth off to another spot (where he can be alone to devour it).  Does this sound like wildcat behaviour or what?

Dante is one of those cats who also scrapes at his water dish and splashes the top of the water with his paw before drinking.  This is apparently another behaviour inherited from his wild ancestors who typically tested the water with their paw before imbibing.
6.  Dante actually does CHASE squirrels from time to time.  I know most of the more recent pics show him just watching them, but when the opportunity is right, he takes off after them.  Truth be told, it seems like more a game than a hunt.  The squirrels actually seem to enjoy it, too, and will come back asking for more.  "Chase me, chase me", they squeal. 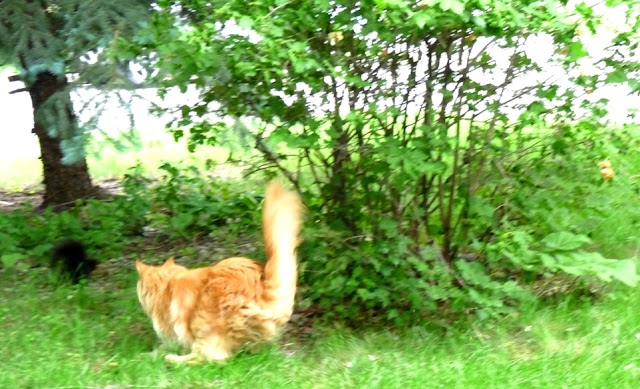 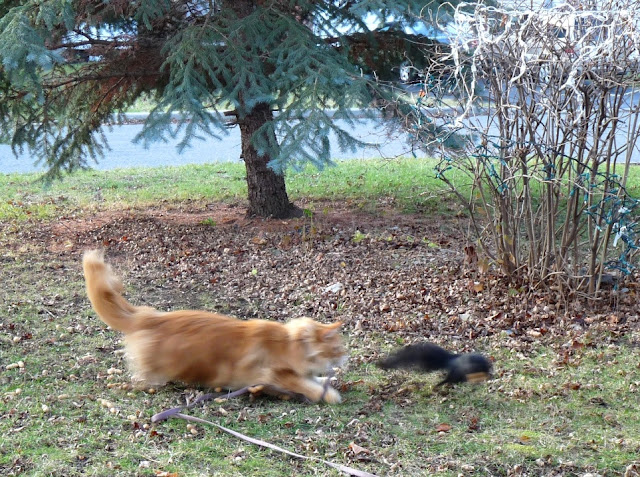 Who knew Dante could move that fast?

7.  Dante is very good friends with Crazy Cat Lady Carm.  In fact, she is the one who first discovered him
and suggested to Mama that she start a blog, and then introduced her to the CB. 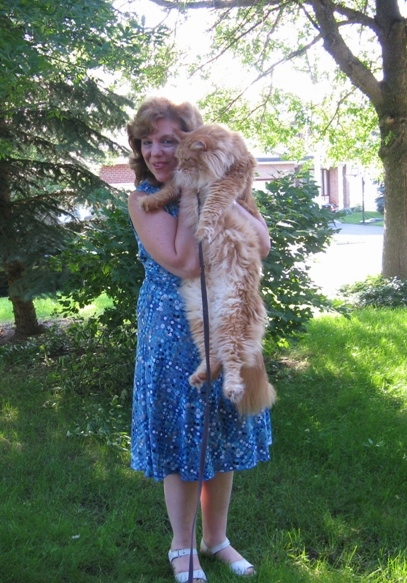 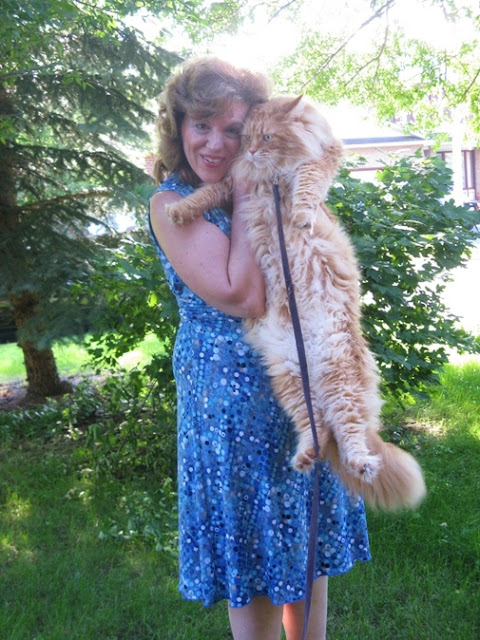 Now Dante and I are cheerleaders for Carm in her fight against Multiple Myeloma.  She's a strong and feisty lady who maintains a sense of humour even through the most difficult times.  We love you, Carm! 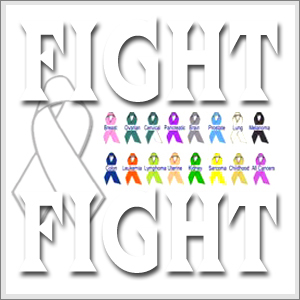 So, because we love her so much, we are giving this "Very Inspiring Blogger Award" to Carm.  She is a real inspiration to us.  We give it to you, freely, Carm without expectation.

We would also like to pass this award along to the following bloggers:
Spitty-the-Kitty (because we want to know more about him)
Katnip Lounge (because their Mom will come up with something really freaky)
Housecat Confidential (because Quill is so darn cute and his Mom is a great writer)
Sweet Purrfections (because Truffle and Brulee are so irresistible)
Brian's Home (because he is so dedicated to the welfare of homeless kitties)
Rumblebum (because Rumbles is a fellow Maine Coon and Hammy is a clown)
Kudos to all!

Concats on the award! Reading the 7 things was great -- #2 made us smile. And our mom would love a kiss from Dante. :-)

Concatulations on your award! Woo Hoo!

Well that was tons of fun hearing all those things about you Dante. We already thought you were wonderful, now we know you are. We love the fact that you are so friendly with other people. Also we didn't know you were such good friends with Carm. That is terrific that she has such a great cheering squad. We have been following her very brave fight with the horrible disease.

WHAT a genuine pleasure and treat the the eye as well looking at Dante..but learning so much more about him. I would have given you that award myself but I had the wrong headed idea that you didn't particularly care for awardies. Made that up in my own wee Katie brain.

Wonderful looking at you Dante and of course seeing the love you have and inspire is a joy.

Lots of love to you.

Maybe he doesn't get them on his own because they think he is award enough on his own, he is just so darned impressive..

and Dante, you can give me kisses any time.

Yippee! Our very first award! Since tomorrow is our Friday at the Movies, we'll post on our award next week. Thank you so much for thinking of us.

We loved learning more about Dante!

Bravo! The mom wants to kiss Dante too! How sweet! Oui Oui doesn't like people food, but makes an exception for butter was well. Her other exceptions are whipped cream and peanut butter.

Oh Wow!
What wonderful things mes gots to knows about Dante! Me has been in love with Dante (and so has my Mommy) since me first sawed him and me has been in love with Cat Lady Cam since me first saw her cat and peoples portraits! And Wendy, me is so happy yous started blogging, not just because yous is a fellow Canadian, but yous has as bent a sense of humor as our Mommy!
Yous always makes us laugh1
Thanks yous for telling us more about Dante!
Kisses
Nellie

Oh wow!! Thank you for the award Mister Dante!!

I just wanted to tell you - I do the SAME thing with my kibble!! I fish it out and eat it from my paw, or I drop it onto the floor from the counter where I eat, then nom it. I'll do this piece by piece till I'm full, and the humans LAUGH!

Such a love muffin you are, Dante!!

Thank you for sharing a bit about Carm as well, we love her too and wish her all the best...

Thanks to Dante and Wendy for the Inspiring Blogger Award. This is a great post about Dante. Thanks for your love and friendship!

Thanks for my awardie, Dante!! I loved reading all that stuff about you (even when your Human writed about those embarrassing nick-names--we just have NO privacy at all!)

The Human says she would like to give you a kissie--okay, but she better not try it on me!!! Ha ha ha!

(We actually did this awardie a little while back but we probably have some things to add one of these days!! XOXOXO)