Dante wants to wish all of his American friends a very Happy Thanksgiving Day!  He is Canadian and had his Thanksgiving way back at the beginning of October.  He loves turkey so much though, that he has wangled his way into his sweetheart's family gathering.  (Of course, he loves Sascha, too, but turkey comes a close second.)

Dante wants to thank Sascha's brother Brian of "Brian's Home" for inviting him to dinner! 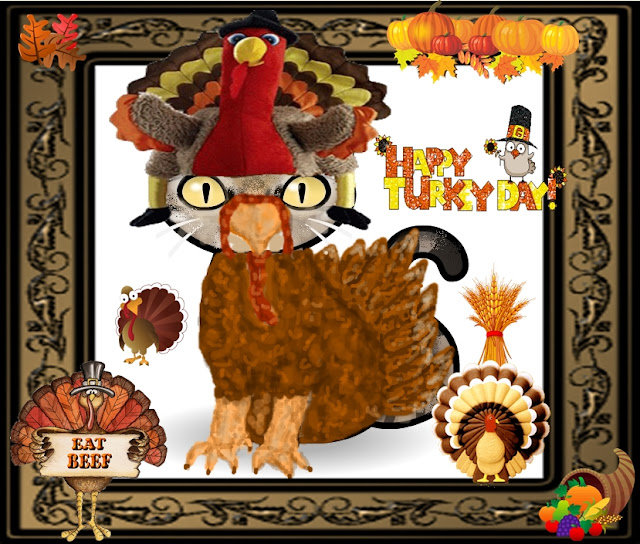 Brian obviously has a fetish for poultry costumes.  He dressed as a chicken on Halloween, and now he's a turkey.  Whether that's fitting or not, I'll leave to you to decide.

All that he asks is that you don't GOBBLE him up! 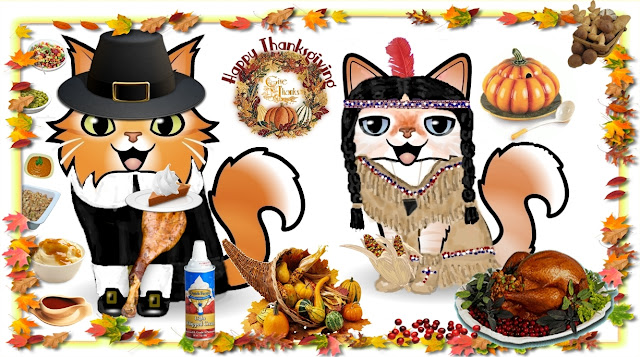 Dante and Sascha dressed up as John Smith and Pocahontas.  Just in case you were worried, the turkey on the table isn't Brian (who is also chowing down on the stuff as well as the stuffing).

Dante seems to be hogging all of the side dishes, though Brian says he's willing to share (nice of him isn't it, considering he's the guest).  Sascha is busy telling efurryone 'corny' jokes and hasn't touched her supPURR yet.

Sascha asks:  "Why does Brian have such a husky voice?"
Sascha answers:  "He ate the corn without shucking it!"

Yuk, yuk, yuk!  Poor Brian seems to be the butt of many a joke today, even though -- or maybe because his butt is covered in feathers.

Dante says:  "I YAM very thankful to be here at this bountiful table with my sweetheart and her loving family.  Now let's eat!"

And so they did.

Dante is the purrfect Gentlemancat! Even though you celebrated earlier this year, Happy Thanksgiving from all of us to all of you!

What a cute post - we love Brian's avatar! Thanks for stopping by for Joey's special day!

Happy Thanksgiving!! We celebrated with Autnie El and friends from Canada!

What a great post=we love the fun avatars!...Happy Thanksgiving, we are very grateful to be your friends! ...xoxo...Calle, Halle, Sukki, Mommy Cat, Daddy Cat

Hope you enjoyed a lot of turkey!!
Your costumes are beautiful!
Purrs

oh gosh Dante, I did not know you and Sascha were, well, ya know..."an item"...sorry if I was too flirty in my comment on Wed. oppps...maybe I better go apologize to Sascha too...runs to the Fast Leopard Teleport Tunnel...dials in Sister Sascha's address...WHOOSH!