FRIDAY IN THE DEEP FREEZE WITH DANTE!

Yesterday, Dante was reacting to a small dusting of snow that we had in our general area. It's just about gone now.

Since he seems to have forgotten what winter is all about, I thought I would resurrect these photos from last winter, January and February of 2009.

You see, he is well acquainted with snow. Even in the winter, we go out almost every day (as long as it's not extremely cold) to get some fresh air for half an hour or so. 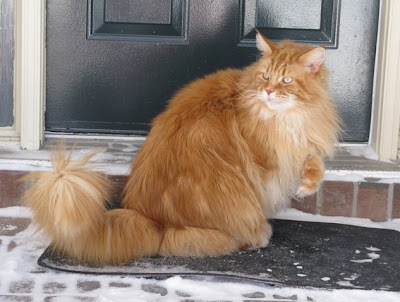 Dante's little toe pads get so cold he has to lick them every few minutes. 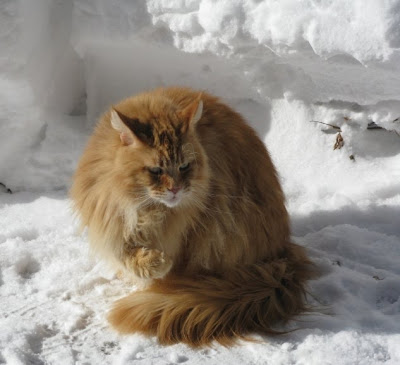 Here he is in January when the snow was at its deepest. He's trying to keep at least one foot warm, there. 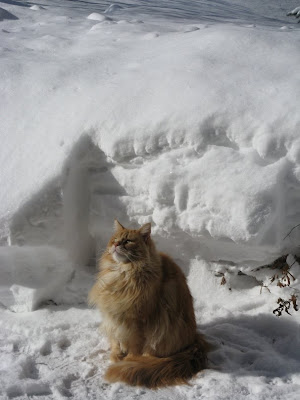 You can get an idea about how high the snowbanks were in our yard. That's our front walkway that Dante is standing on. 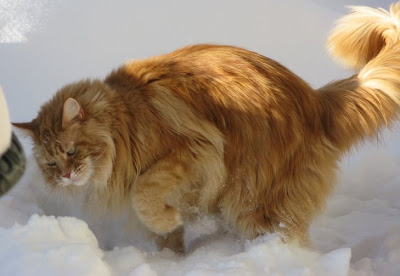 And Dante isn't shy to do his business in the snow. To him it's just one big white pile of kitty litter. Besides, he absolutely LOVES to dig. I've seen him dig just for the pure joy of it, at times.

Here is Dante making his deposit in the snowbank. You can see the look of concentration on his face.

Following is a very pretty series of photos of Dante doing just that! His business that is. He says "There's no business like snow business!" 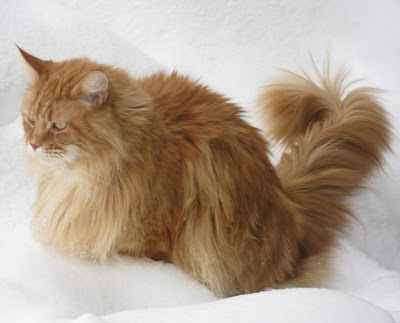 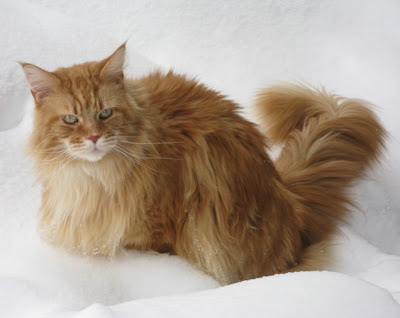 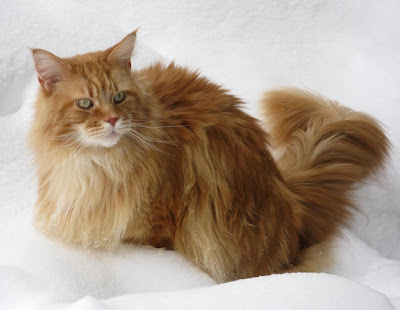 I love the way these pictures turned out. Dante almost looks like he's in a white desert. The drifts of snow are so soft and flowing -- like dunes. Snow dunes! And Dante's dune it in the snow -- so there you go! 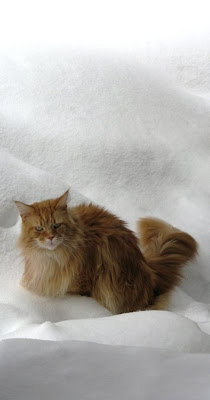 This shot shows how high the dunes really are! Dante was made for the snow, as Maine Coons are. He's such a hardy fellow. That's why I found it really funny when he complained about that very small dusting of snow just yesterday. I think these pictures have jogged his memory! 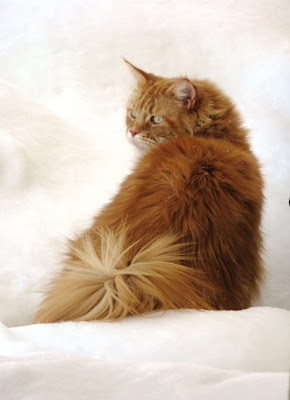 I love the over-the-shoulder smoulder in the cold white drifts! 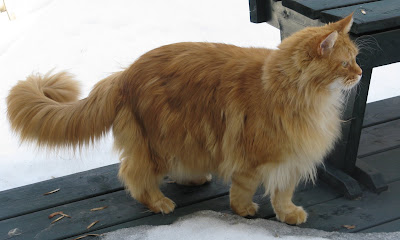 And here's a final winter shot of Dante on the back deck, skirting the ice. He hasn't learned to skate yet, so that's entirely understandable.

Anyway, I hope you are all reassured that Dante is well-equipped to deal with life in the winter. After all, he does live in Ontario, Canada, and our winters are generally quite snowy -- though they have been milder of late.

Dante's not that furry for nothing!
Posted by CCL Wendy at 8:29 PM

Dante, all I can say is better you than me...

Wow you can really move through that snow Dante. Jack hates snow and refuses to go out in it. Luckily, we don't get much here in Virginia. Dante how did you do your business without freezing your harballz?

Dante is a brave mancat !
I also wanted to fell the snow (impossible in Brazil ¬¬')

Dante could you please keep the cold air up there with you? It's 18 degrees tonight and the wind makes it feel even colder. So far we haven't seen any snow here which makes us really happy.

Another Ginger Snow Kitty!! I LOVE thrashing around in the snow. I hope they let me out a bit this year. I never go too far when it's that cold!

Dante, you look very good in the snow! We never go out into the snow...too cold for us!

Dante was having the best time in the snow!!

Dante looks great in the snow!

We love the pics of Dante in the snow ~ he looks magnificent. We hardly get any snow here in Sidmouth, England, UK ~ just the lightest of dustings. We hardly even get a frost ~ but just a few miles away they get deep snow. We think it's because Sidmouth sits in a sheltered coastal bay: Lyme Bay.

Dante you could send a bit of snow our way...we hardly ever get any in North Carolina. I'm glad you have so much fur...you look nice and warm in the snow!

That snow looked like fun,but very cold. We feel for you. We see you have the embarrassment of your mum taking photos of your 'private' moments too.

The contrast of your fur against the snow is amazing! We just got a dusting of snow last night, but other places in the state got a few inches. Mama loves it (she's a winter baby) but we're not so sure yet.

Burrrrrrrrr... We LOVE the picture of Dante basking in the sun! He is such a looker!

Hi Dante! I just gave you a really neat award called the Kreativ Blogger award! Come on over and claim your prize! Hope you enjoy it!

Dante, you're such a brave kitty! All that snow makes our Mommy shudder. We live in the south for a reason! MOL

Purrs and hugs,
The Kitty Krew

PS - the tent in our photo today is just a few months old, we won it in one of Hansel's raffles; it's been posted specifically just after we got it, and then probably been in a photo or two since then, but probably hasn't been in a *bunch* of photos. :)

OH NOES that's too much SNOWS!!! Don't even want to think of it snowing that much this year! BUT... Dante looks gorgeous against that white background!

Oh no, it's wet! I can't be bothered to get wet!
Mom took me out when it was snowing to check the mail and I made sure she knew how unhappy I was (she was holding me because she knew I'd not venture out where it was wet on my own).
-Curzon