TAILS TUESDAY: DANTE HAS A TIP FOR YOU!

It's Tuesday and time for another shot of Dante's tail.  This one only shows about the last half of his tail including the poofy tip.  You can see that there are swirls of white and light cream mixed with the brilliant red.

It's almost like frosting on an orange cake!  Come to think of it, I would always swirl the icing, too, as I was applying it.  As far as Dante goes, you can have his cake, but you can't eat it, too -- 'cause tails are sensitive when the bitey's put on them.

And we don't want Dante to have to go into the retail business.  He's doing fine the first time around. 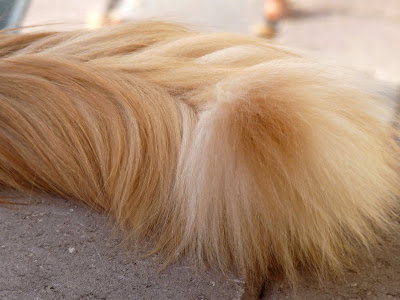 You have a lovely tail tip! Even nicer than Gemini's!

Fabulous Fantastic FLOOFalicious tail you have there Dante... Pride has a little white tip on his which is kind of cute. I think your momma gave us a good idea for a blog entry for next Tuesday!!!

*bowing to the tail greatness*

Thats one heck of a floofy tail Dante!!!

Dante has a very hairy tail!

That is quite a plume, Dante!

I wish I were there. I would leap on your tail!
Cat Mandu

Dante's tail is a tipped treat this Tuesday!
~Lisa Co9T

What a fantastic tail! If I were there, I don't know if I could stop myself from petting that tail or playing with its tip

Once again, I'm slain by floofolicousness! May I snorgle your tail, Dante?