DANTE: AND NOW FOR SOMETHING A LITTLE DIFFERENT

I say "a little different", because there's nothing significantly different from the Dante you already know.  Each one of these pictures, though, is unique in its own way and has captured something quite special.  I gathered them from several days of recent photoshoots to assemble them here all in one place.


(Biggify at will! If you're a Dante fan, you will enjoy it.) 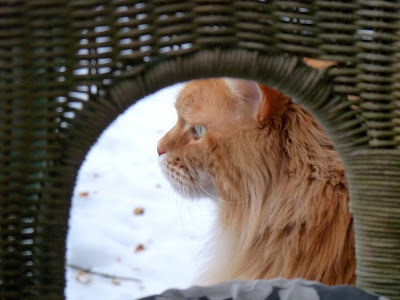 This is Dante shot through the open arm of the basket chair on the front porch.

It acted as frame for his profile, I thought. 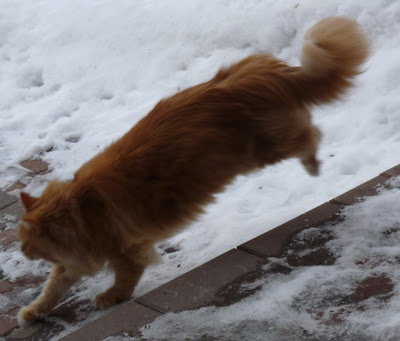 This is Dante just as he landed after a short flight.

In this shot, you can truly appreciate the length of the big red beast. 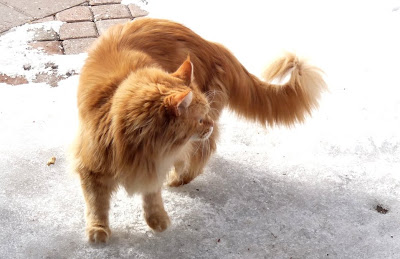 I loved this shot because of the rather unique position.  There's a certain flow to it, and a sense of timelessness for some reason.  Like a moment frozen in time, I think. 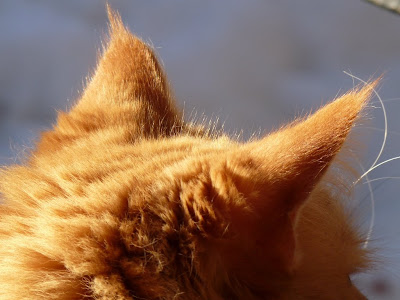 This, of course, is a close-up of ears with a smattering of whiskers all highlighted by the bright winter sun.

Dante's red fur just intensifies at this time of year -- quite unlike the summer months. 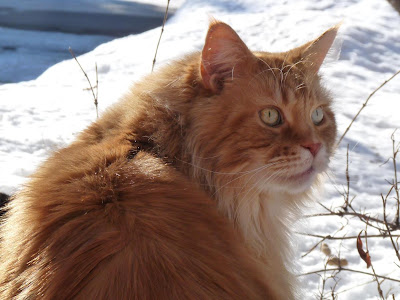 Aside from being a great close-up shot of Dante's handsome face, he has this rather enigmatic look (sort of like a stunned Mona Lisa). 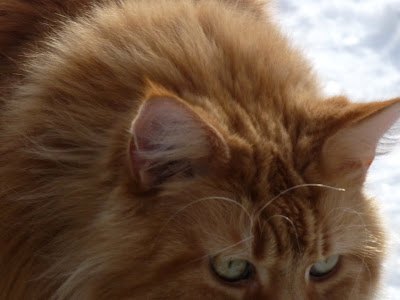 This shot was an outtake, but I rather like it anyway.  Dante was walking toward me and by the time I took the picture, he was already too close.  I like the look of purpose in his eyes, though -- and it's another great ear shot!  Next time I shouldn't wait until he's within earshot to shoot (LOL)! 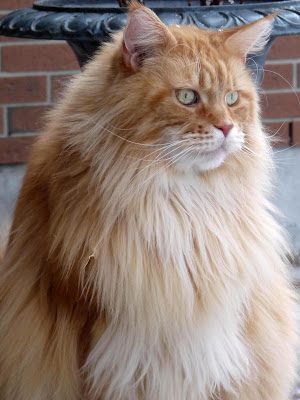 This is just a super-floofy shot.  I even like the little wet wisp of fur which Dante had just finished grooming.  He looks like a big, fat, happy cat here, even though he's not fat at all.  That fur certainly fills him out!

Well, I hope you've enjoyed the eclectic mix of Dante's pix today.  Dante has many different sides and it will take many more photoshoots to truly capture them all.

You always get such beautiful pictures of Dante. Of course, the subject helps with that.

Mom says she wishes we had more natural light to get pictures of me.

Even your outtakes are spectacular!!

OMC! Dante, you are one of THE most handsomest cats! You are PURRfect for picture taking! LOVE the basket picture!

Dante is such a handsome dude, and we always enjoy shots of him. You have a real knack for photography, Wendy.

I changed my settings so hopefully you can communicate with us again.....:) xxxxxxxxxxx

These are all great shots of Dante but I admit that my fave is the last one showing how amazingly floofy he is!

Dante is a very photogenic cat. I like the first one with the basket, and the outtake...well who am I kidding? I loved them all!!

We love the basket picture the best, although all of them are lovely. Mama loves the ear shots--she has some kind of fetish for kitty ears.

Dante you always look so good!

We just think that Dante' is the most magnificent cat, no matter the setting, he makes them all more impressive!

We already had our bean convinced coons were the best cats ever, but your fluffiness has cemented it. We have her even saying her next cat's either gonna be a MC or a norwegian forest (she's half norwegian herself so I guess we shouldn't be offended). We pass on some of the rumblepurrs that we got.. the best purrs are purrs shared! Keep your beans warm, dear!

Dante is such a big handsome cat. We love looking at all the photos of Dante.

We always love to see your pictures of Dante. These were wonderful!

WHimpurr could never tire of seeing pictures of his highness, Dante!!! *swoon*

Dante is gorgeous! My godparents who live in Boston would love him... they have two Maine Coons. Candy and Casey. There's even a picture of each of them in the 100th post collage I did. Candy's face looks SO much like Dante's. They are huge, but not fat. Casey, the boy, is so big that Katie could probably ride him like a horse. Ok, now she's mad at me. Telling me to stop already.

I love ANY picture of Dante the big red cat! Every single square inch of that boy is fabulous! You capture his magnificence so PURRfectly!

You're welcome to use Cataloon, but I don't think I thought of it myself.

No doubt about it. Dante is the floofiest and handsomest of mancats.

P.S. I have given him an award and hope to have it posted soon.

I love the first picture, it's really beautiful. And that last one too.