ALL ABOUT DANTE AND HIS BIRTHDAY DATE!

Today is Dante's 8th Birthday!  We know the exact date he was born because we got him from a Maine Coon breeder and, of course, this information is recorded.  Here is a picture of Dante and his littermates nursing shortly after they were born.  His mother's name is Lacocoon Eleanor Rigby.  Dante's father is Lacocoon Sergeant Pepper, so he was definitely born with some "Beatles" blood running in his veins. 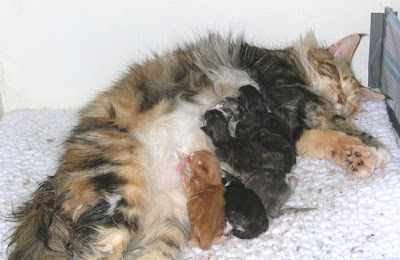 This is Dante at a couple of weeks of age. 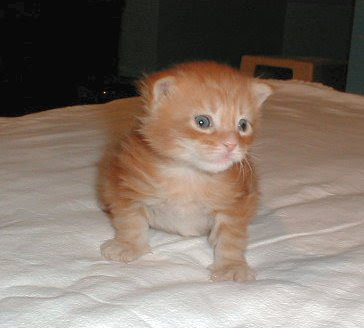 And here he is a few weeks after that. 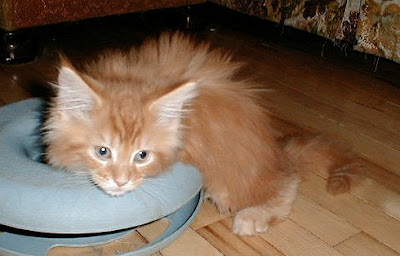 This is King Dante after we got him home -- he was about 12 weeks of age here. Perhaps about five months old here.  Notice how much more of his tabby stripes you can see before his full coat of fur came in! 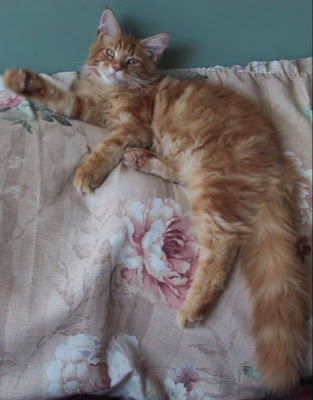 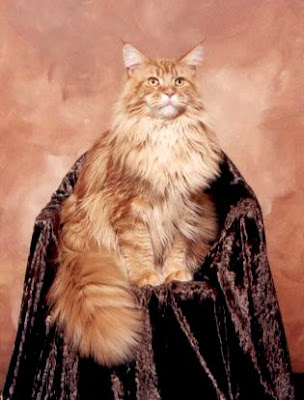 It's also interesting because Dante's eyes were amber originally, as you can see from this picture, but later turned to the vivid light green that they are today.

Now that we've given you a stroll through Dante's early days, let's bring you up to the present day, which is January 15, 2010!  Dante is 8 years old today, and has been searching his whole life for the ladycat of his dreams -- and he finally met her.  Of course you must know by now, that it is the exquisite Miss Camille Suzanne from "Our family cat-a-blog".  They had their very first date on New Year's Eve and it was better than either of them could have ever dreamed.

Today, Dante wants to spend his birthday with his girl, and show her a good time on the town.  First, they are going skating on the Rideau Canal in downtown Ottawa.  Here's a picture of it so you can see. The Canadian Parliament buildings are in the background. 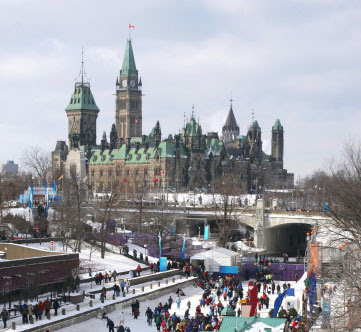 (The Rideau Canal is a beautiful sight throughout the year, but in the winter the canal turns into the "World's Longest Skating Rink" at 8 kilometers.)

After skating, Dante is taking Camille to the Chateau Laurier Hotel which is quite closeby, for a romantic dinner before returning home to spend some quiet time beside the fire. 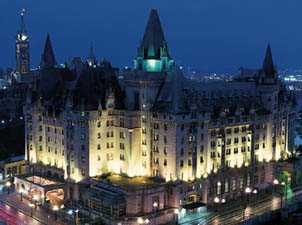 Doesn't it look just like a castle?  How romantic!!! 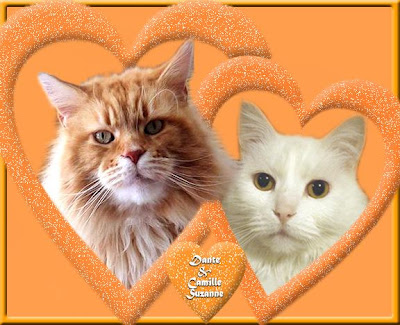 Here's a picture of the happy couple taken just after Miss Camille Suzanne arrived.  Don't they look like they belong together? 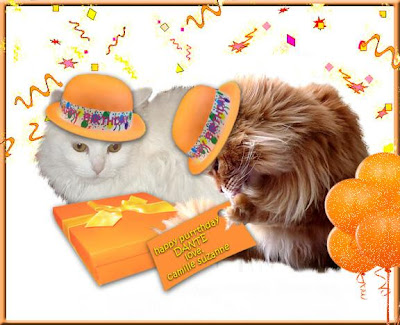 Miss Camille Suzanne had a very special surprise for Dante, and she brought orange hats and balloons, too!  She knows that orange is Dante's favourite colour -- especially since he's orange, himself. 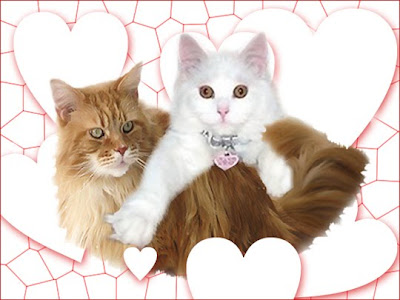 While they were skating, they got a little frisky!  But not to worry, they were only having fun.  Dante is a true gentleman and would never sully Miss Camille Suzanne's reputation.  They had a lovely time in the snow.  Love is all around! 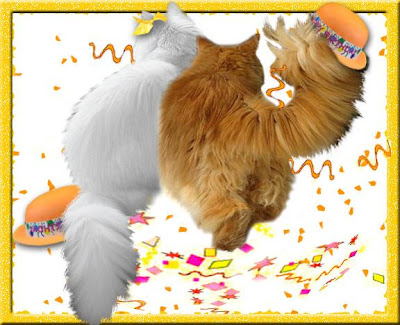 After dinner they went for a walk on the snowy downtown streets.  They talked and laughed and got to know each better.  Miss Camille Suzanne was having the time of her young life.  She giggled at all the funny things that Dante was saying.  Dante is quite the wit after all. 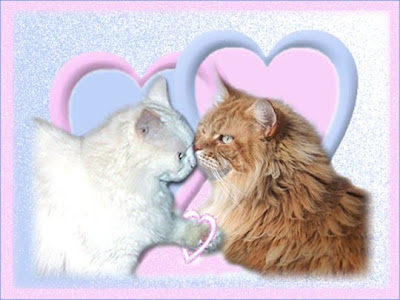 After a lovely evening back at home, Dante kissed his sweetheart gently, and escorted her to her awaiting boogie mat. "Thank you for making my birthday so PURRfect!" said Dante.  Miss Camille Suzanne just batted her eyes and smiled.  "Until we meet again, sweet Prince", she said as her mat gently took off into the night.

In no time flat, Camille was back at her own home, dreaming of the next time she would meet her true love.  She was very eager to tell her Mom and her sister about the marvelous time she had.

Meanwhile, back in Ottawa, Dante was already dreaming peacefully.  I think you might be able to guess what his dream was about.

P.S.  A very special thanks for Ann Adamus of Zoolatry for her wonderful creations!

Happy Birthday Dante! Mom is squealing over those kitten pictures. What a cutie kitten!!!!

Mom is totally thrilled to see you as a kitten. So adorable and no wonder you grew up into such a handsome kitty.

Happy Birthday Dante!!! We loved the stroll down memory lane.

PS the human is hearing this song in her head:
"you sure were a beautiful baby... and baby, look at you now!"

Happy Birthday Dante. You already had your distinctive facial expression in the third photo, (second photo of you.) We are glad you had a lovely date with your girlcatfriend.

Happy Birthday Dante! It's strange to see you before your floof came in. You would never guess it was you!

Dante, all of us Good Cats wish you a happy birthday, and many more to come. We're also glad to hear about you and sweet Miss Camille Suzanne -- may your love continue to grow stronger!

Happy Purrthday, Dante! You were the most adorable kitten and have grown into a handsome mancat. We hope you have a fabulous day!

Happy Birthday to Dante- the World's most formidable Maine Coon Cat! I've seen them all and declare you the best my man! Wendy and I met when Dante's breeder posted a photo Wendy had sent him and I literally FELL off my computer chair- amazed by the sheer magnificence of the dear boy! LOVE you DANTE! Many Many Happy returns of the day! Many Many more birthdays to you!!! XO Your #1 Fan- CCL Carm

Purrrrrr....Dante you were an adorable baby kit and now you are such a handsome mancat! Happy Birthday to you! I brought some cat nip!

Happy Birthday to one of the most beautiful
cats I've ever seen!
Great pictures!!!!!!!!!

What a cutie kitten - no wonder your mom loves you so much. What a lovely day with your ladycat sweetie - you are a true romatic Dante! Happy Birthday to you for all of us. The Ladycats are very jealous today!

Happy Birthday Dante! What a wonderful date you had with Miss Camille Suzanne.

We hope you are having a wonderful birthday...but from the pictures with Miss Camille Suzanne, we can see that you are!!

Wow, even at a young age he had a regal bearing! Many more happy birthdays to you, handsome guy!

Well, happy purrthday Dante,and many more. My, what cute little guy you were back then.

You & Camille make such a lovely couple.

Happy Birthday Dante!!!!!!!!! How fantastic that your mom has pictures of you from when you were so young.....our mamabug was especially taken with the one of you and your litter mates soon after you were born.

We also loved all the pics of you and Camille Suzanne.....you make such a beautiful couple....xxxxxxxxxx

Happy Birthday Dante! You were the most adorable of the kits! And you are quite a handsome mancat. Camille is very lucky!

Happy Birthday to the fabulous Dante and congrats on his lovely partner as well!

I love the shot of Dante at 12 weeks...so full of himself, but so innocent.

Happy Birthday Dante!! We hope you have a wonderful day! Here is our birthday song for you!!

What day is today?
It's Dante's Birthday!
What a day for a Birthday!
Let's all have some cake!

We hope you have lots of fun and treats today!!

Happy birthday Dante! So hard to imagine you as an itty bitty kitten. But you were and you were adorable.

HAPPY PURRDAY DANTE!!! You are a true gentlemanlycat!!! What a wonderfurl way to spend you purrday, with the ladycat of your dreams! You both seemed to have enjoyed your time together! Hope you had a furry magical purrday!!!

Happy Birthday, Dante!! OMG our Mom thinks you were SO adorable (and still are, of course). We LOVE your kitten pics!

Happy Birthday, Dante! It looks like you have a spectacular day and we wish you lots of treats and scritches in the year to come.

Happy Birthday, Dante. Don't have to ask if you had a good day.

What a lovely photo album, from newborn to now...Have a Magnificent Birthday, Oh Handsome One!

Dearest, I have spent the day prePURRing for our magical evening together. My ♥ belongs to you and only you.

Miss Camille Suzanne was wearing her traveling outfit. Don't all proPURR ladies do so? What a special time the two of them had this evening.

Wonder what will take place on Valentine's Day!

Happy Birthday, Dante! We really enjoyed seeing all of your "growin' up" photos:) And we're so happy that you've found your one true love!

Happy Birthday Wishes to you, Dante!
... although it sure looks like all your wishes have already come true!
We loved the whole story and especially all the wonderful photo creations. Miss Camille Suzanne is QUITE a catch.

When you are all rested up after your birthday date, there's an award waiting for you on our blog

Oh Dante, happy 8th birthday!
We're one day late but it's better late than never, isn't it? We so enjoyed those baby and youngster pictures of you. What a glorious Maine Coon you are!

I hope you had a very Happy Birthday, Dante! It is hard to believe that you were once as small as I still am!

Happy Purrthday Dante. You are quite the mancat!