DANTE AND DADDY DOING THEIR THING!

Despite the cold weather, it's not too bad if you sit outside on the front porch.  The garage beside it blocks most of the wind, so it's more than tolerable.  Dante's Daddy brought him outside for some fresh air, and Dante chose to sit on the porch chair for a change -- maybe because Daddy was sitting on the bench having a cigarette.  Quite ironic I think, to come outside for fresh air and then smoke!  We're not too fond of Daddy's bad habit, but at least he only does it outside and never in the house.  (We'd really like him to give it up, though.)

First there is a series of pictures of Dante grooming himself.  He is constantly licking his paws, which I figure may heat them up momentarily, but makes them wet and then the spit freezes on them once more.  So, he just licks 'em again for good measure.  There's some real good lip-smacking going on there, too!  This is serious stuff, ya know. 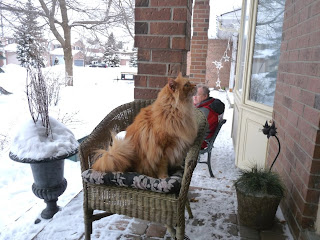 Checking out the front door to see if it's open even a crack! 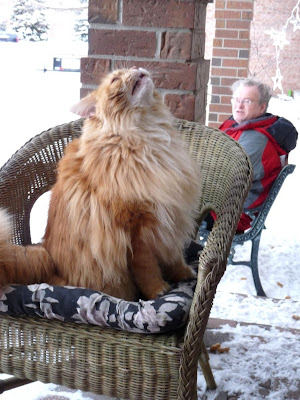 Saying a prayer to Ceiling Cat that his beans might come to their senses. 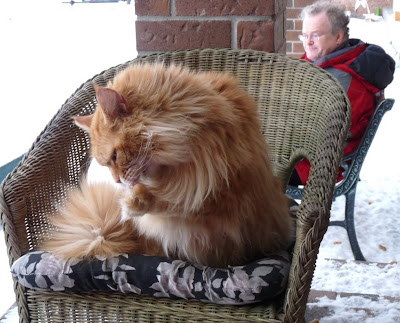 Licking the old paw to warm it up! 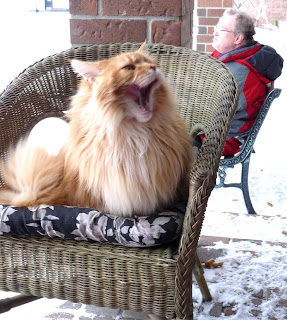 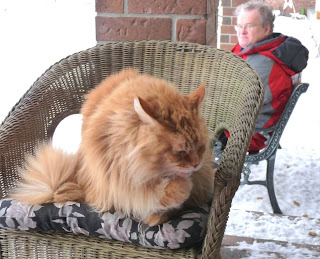 Although his Pa's sitting behind him, he's licking the paw in front of him, again! 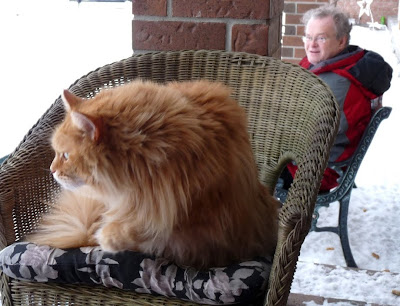 I call this position "Curvature of the Spying"! 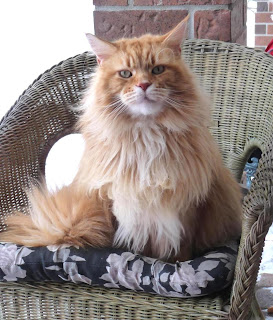 I also managed to take a short video before we went back inside the house.  You'll get some live action of Dante grooming himself (oh, bestill my heart!), and if you listen carefully at the end, you can hear him give one of his muted howls of protest.  You'll have to excuse me for turning the camera at the end -- I just wasn't thinking.  I often do this when snapping pictures, but didn't think how odd it would look in the video.  Mea culpa!

Here's the link to YouTube:  "Dante on the Front Porch in Winter"

Dante, you are looking great out on the porch! Nice bathing technique. Excellent use of tongue.

Your all done photo is the BEST!!!

I'm glad you have a place to sit in all that cold. You look comfortable but I think that I wouldn't like that weather at all.

Is that Dante praying to Ceiling Cat in the second pic or channeling a wolf??? ;-) Loved the video!

OMC, Mummy still can't get over what a big boy Dante is, it sure shows when he's sitting in the chair!! She feels the same about me though, I'll be doing something and she'll suddenly realize what a big boy I am (and I'm still growing) Silly mummy.

Dante, you are such a handsome mancat!

We'd FREEZE to death if we sat outside of our house. Dante is one brave kitty!

Ah, Dante! I guess I shouldn't be surprised how you take up the entire chair! I love the All Done photo the best too. I'll have to wait until I'm home to see the video as we do not have sound or a good internet stream at work. Stay Warm All!
~Lisa Co9T

Keep those paws nice and warm out there Dante!

Very imPURRessive pics and video... Good idea to sit out on the porch even in wintertime... Our daddy is outside snow blowing! He's fun to watch out the windows from our warm house! GR8 Dante pictures- SUCH an awesome guy! Good to hear your voice again!

Fantabulous fotos, Dante!!!!!!!!!! And we loved your video. xxxxxxxxxxx

Dante is such a big floofy boy, but I am not surprised that even he wants in on a cold day! I am sure the floof only helps so much!

Stay warm and have a wonderful weekend!

Dante is sooooo floofy and big. I <3 Dante in a big way!

oops, have to be careful, otherwise 9 might get jealous

All that floof helps on a cold day. Keeping your dad company while he takes in some fresh air with his smoke is really nice. We wish our mom would go outside to smoke but then we'd probably never see her. Yep she smokes like a chimney. Stay warm!

Dante is one large magnificent mancat! He takes up the whole chair!

It looks like you had a beautiful afternoon. You sure are a very handsome mancat!

It is furry cold outside fur any-cat or kitty! Dearest Dante, please hide the next time your momma and dadda want to make you sit out in the cold☺

omfgg I just now realized how big you are, dante? If you don't mind, mombean is curious how big and heavy you are... She swears you must be near record-breaking! I on the other hand just think you're the most handsome cooncat on this side of the planet! But I'm biased, I guess...
-Jadzia