CHILLING WITH DANTE ON AN EASY SUNDAY!

Before everyone starts to ask "you still have snow?", these pictures were taken two weeks ago.  Today, there is no snow in either our front or back yards, though I hear it's going to turn colder again -- and who knows if the white stuff will return.

I chose these pictures because Dante was actually "chilling" (the snow helps with that, too).  There was also a bit of a breeze and it ruffled Dante's considerable furs exposing his pale underbelly.  I also love how some of his longer fur hangs over the front of the bench in a couple of these shots.

I take so many pictures that I can never possibly put them all on my blog, but I like to select the best ones, so sometimes I go back in time a little.

May I present, Lacocoon Dante as he actually appeared on March 6, 2010. 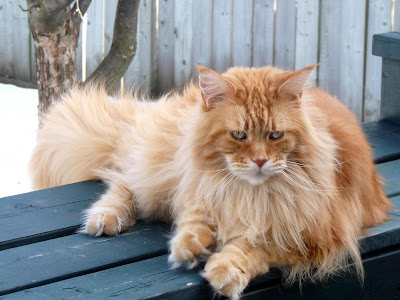 (Biggify any of these photos for maximum effect) 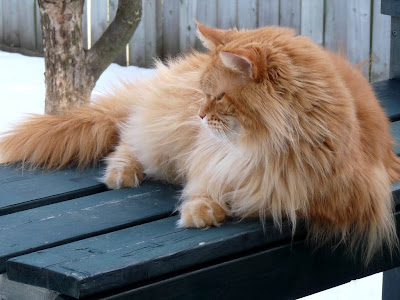 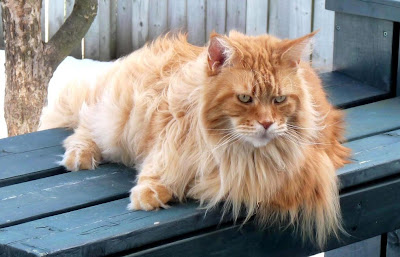 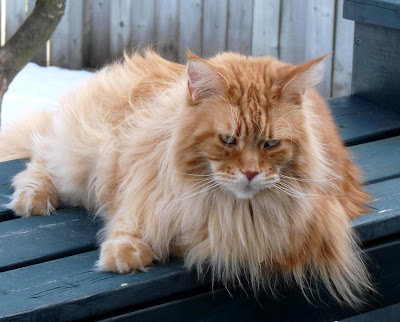 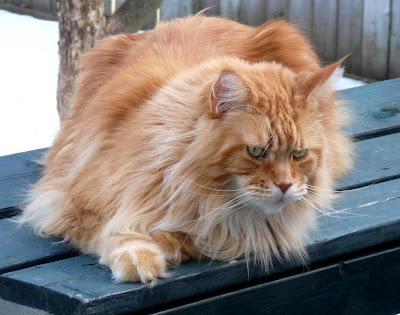 Have a wonderful and relaxing Sunday efurryone!
Posted by CCL Wendy at 8:07 AM

Wonderful photos, as always. I hear you about taking so many pictures. Mind you, most of mine are lousy and I have to sift through for the better ones. LOL. Even so, I figure better too many than too few. I didn't have a digital camera when I had Chum, except for the last few months of his life, so have hardly any of him. That's why I have thousands upon thousands upon thousands of pics of the boys now. Not so many of Annie (gee, wonder why!), though I try!

Anyway, I hope you all have a wonderful Sunday. It's chilly here, a good day to be puttering around inside. :-)

LOOKS good and relaxing! You have the fine are of chilling down to a science Dante!!!

You really turn "chilling" into an art form, Dante!

Dante, you are the floofiest kitty my Mom has ever seen! Our snow is gone too, but it got real cold last night.

Dante is such a magnificent mancat! My mom also takes a kazillion pictures.

Dante, you are one of the most gorgeous cats our Mom has ever seen; she wants to cuddle those spectacular furs every time she sees you and so do we!!...xo...Calle, Halle, Sukki

Dante is so regal!

You are looking handsome Dante! We often use photos that are a few weeks (or months) old just because sometimes the Woman isn't out taking photos of us for awhile!

I think it's incredible how much a Coon can look like a panther sometimes - especially in the face. Dante shows that perfectly in these pics... Sometimes my Nimbus will go all Lynx looking, especially after a bath when his cheek furs are all messed up! Dante, you are absolutely handsome and sooo snuggly looking!

We're taking lessons down here in B'more, Dante! Trying to be purrfectly chilled!

You're looking so majestic my friend.