Grampa is my husband's father, Walter Sr.  He was born in Poland and came to Canada after World War II.  "Walter" is an anglicized version of the grand old Polish name "Wladyslaw" (which my husband also shares).

Grampa is a WWII veteran and fought at the battle of Montecasino in Italy.  He tends to remember his early days with more clarity, as he now has Alzheimer's.  Grampa currently lives in a luxury retirement home near us.  He thinks it's a hotel.

Dante and Grampa have a very special bond, though.  Grampa lights up every time he sees Dante, and Dante offers him kisses and a pawshake at will.  Dante knows who "Grampa" is, by name, and although Grampa forgets Dante's name, he doesn't forget Dante. 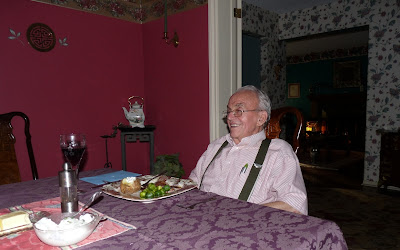 Here is Grampa eating his birthday dinner.  He had homemade zucchini-oregano soup, followed by prime rib roast beef and all the fixings.  Dante joined us on one of the sidechairs and sampled some of the sour cream from a spoon. 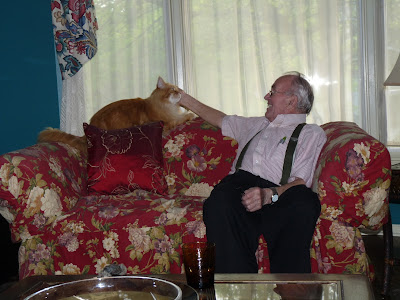 After dinner, we retired to the living room to await Grampa's birthday cake. 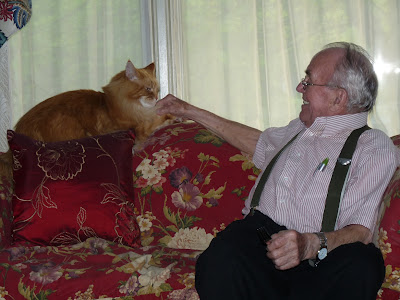 Here's Dante and Grampa having one of their famous "pawshakes".  In this case, I guess it should actually be called a "Grampawshake"! 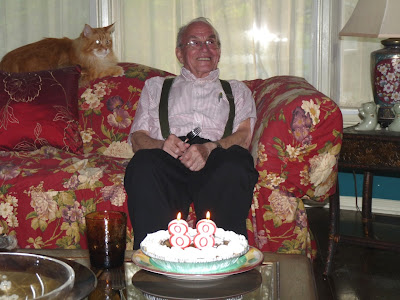 And then, the birthday cake arrived!  Just look at that smile on Grampa's face!  He is 88 years old and still ticking, despite the Alzheimer's and prostate cancer (which he has had for many years and chose not to treat). 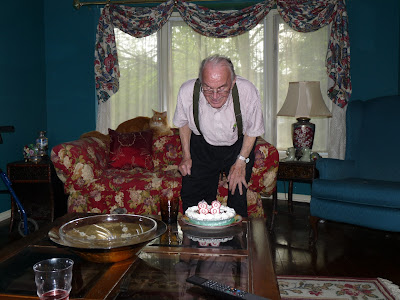 Grampa was so proud that he blew out both "8's" at the same time! 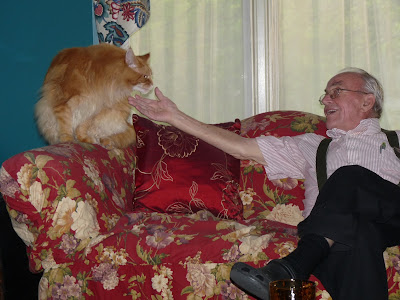 After the cake, it was time for a little chin scratch! 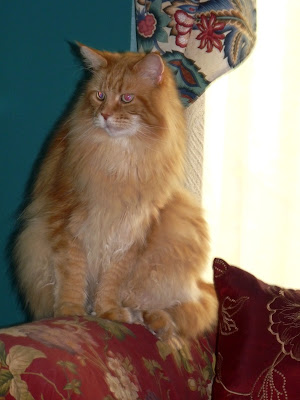 Happeh, Happeh Birfday, Grampa!  I luvs yoo!
Posted by CCL Wendy at 7:44 AM

Happy (belated) birthday to your Grampa! He must a tough survivor, what with having prostate cancer (untreated) and still going strong! We hope the Alzheimer's isn't so advanced yet that he doesn't know who his son and other human family members are. Has anyone thought about video taping him, telling stories from his younger days? That would be a lovely way to keep his memories alive before he loses them.

Our mom's "step-dad" is in the early stages of dementia...Not sure if it's Alzheimer's or another form of dementia. He's still lucid for at least 50% of the time, so lives at home for the time being. It's a strain on our grandma, though, we know. You lose someone you love before their body has passed away.

Sending lots of hugs and Light and kitty kisses to you all.

We know that this was a happy occasion but momma had tears in her eyes 'cause her grandpa came from Poland, too, but he is living in Heaven an' she misses him. Your grandpa looks so happy and nice. Be good to him Dante, those memories you have with him are furry specials.

Miss Camille Suzanne send you special hugs to pass along to your grandpa next time you see him. You might want to check out her bloggy today. She's showin' a little 'skin'☺

How lovely to see the bond between Grampa and Dante - we wish Grampa a belated Happy Birthday.
Luv Hannah and Lucy xx xx

Happy 88th birthday to your Grampa!! We wish him many more.

Some trivia.....our mama's last name is Polish....it is 11 letters long and has c's z's w's and other letters in it. It was a married name that she had for 32 years, and she kept it instead of going back to her maiden name.

We send our love to y'all, including your Grampa.

Happy Birthday to your Grampa!

These are priceless photos! Dante, you are such a good boy to give Grampa so much pleasure!
(My Grampa would be 120 years old this year, so I don't get to see him.)
Mandu

Aw, Happy Birthday to your Grampa, Dante! It sounds as if you two have a good relationship.

What a wonderful dinner you got to share with him, even if all you got was a taste of sour cream. We're sure a prime rib would have suited you just fine too. :)

Dante, we're wishing your Grandpa a very Happy Birthday! Mommy was very touched how you remember him, as if a Kitty ever forgets a great chin scritcher! It's wonderful that Grandpa lights up when he sees you, and you offer to shake so politely.

Happy Birthday''
What beautiful photos. How extra sweet to see Dante in attendance getting his chin scratched."Fuzzy Tales" is right-it a would be a great idea to make a video of your granddad talking about his life
(if I only had of my dad).
Thank you for sharing such a special birthday celebration.

Happy birthday to your Grampa! :)

88 years old! I didn't realize Grandpa was the double 8's.... He looks like he really enjoys himself at your house with the kitties and the pamPURRing!