DANTE'S GOT THE 'ICE-ING' ON HIS BIRTHDAY CAKE!

It's Dante 11th Birthday today and he is celebrating by having an Ice Skating Pawty! 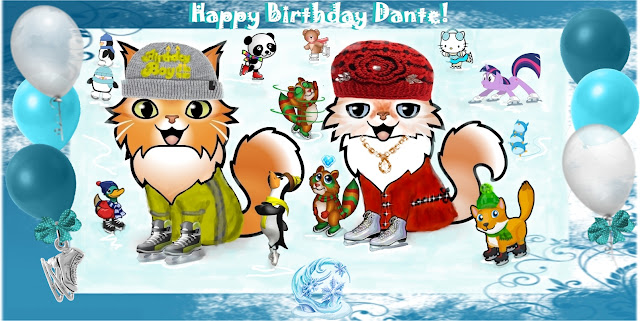 Of course, his gorgeous fiance Sascha of "Brian's Home" is by his side to help him celebrate.  This is her first time on ice skates, so Dante has to help her along a little, but for the most part, she's getting the hang of it -- by hanging on to Dante, that is!

So, all of you are invited to come and skate, too.  First I'll tell you a little more about it.

Dante lives in Ottawa, Ontario, Canada, which is our nation's capital city.   The picture below shows our Parliament Buildings in the background on the left side.  On the right is the 'Chateau Laurier' which is a luxury hotel.  This is where Dante and Sascha are staying tonight.  It's very romantic and looks like a castle.

One of the biggest tourist attractions in the winter months is the Rideau Canal, part of which is iced over and becomes the largest skating rink in the world.  Called the Rideau Canal Skateway, it is 7.8 kilometers long.  The total length of the canal, though, is 202 kilometers and in the summer is used as a waterway for pleasure boaters.

The Rideau Canal is the oldest continuous operated canal system in North America and was opened in 1832.  It was registered as a UNESCO World Heritage Site in 2007.  It opened for skating for the very first time in January 1971 and 50,000 people skated on it the very first weekend! 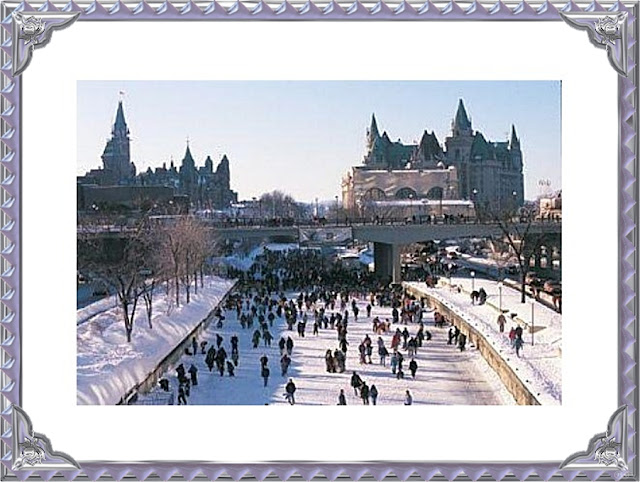 Some of the skaters are a little tentative at first ...

(Whatta hoot!)
But most manage just fine after 'breaking the ice', so to speak (hopefully not with their rear ends). 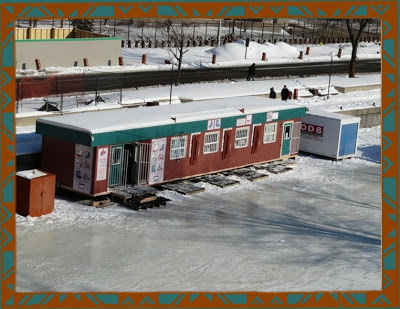 There are lots of food stands, rest-stops and warming huts along the Skateway. 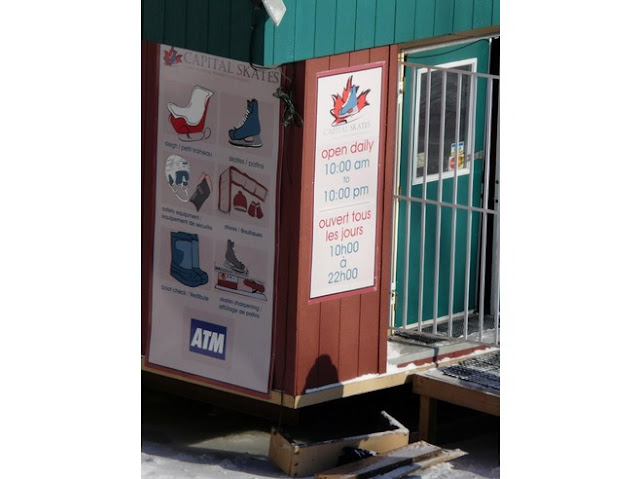 Here you can rent skates or a skate-buggy to push your tot.  Walking is also allowed on the canal.  There is no charge for the use of the Skateway, itself, so if you bring your own skates, it's absolutely free!

So Dante is inviting you all to come down and help him celebrate.  If you've never skated before, don't worry because you'll fit right in. 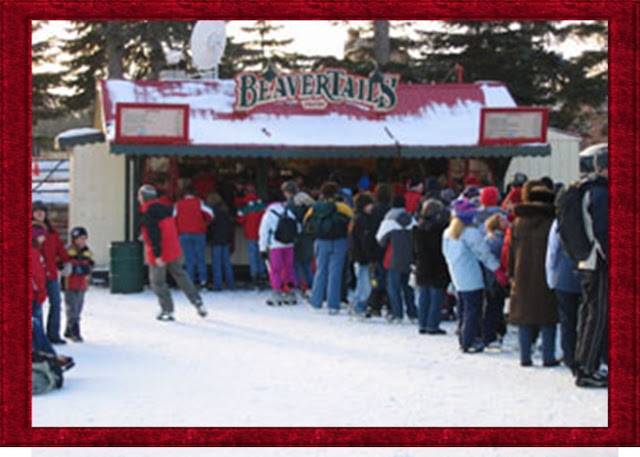 And you don't have to go very far if you're hungry -- although you may have to wait in a line-up.  If you're visiting Canada's capital, trying a 'Beavertail' is a MUST (but hold the mustard)! 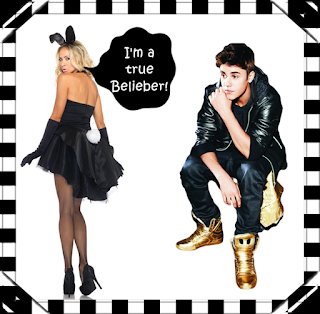 I said 'Beaver Tail' not 'Belieber Tail' (although Justin IS a product of Canada as well)!


Beavertails actually have nothing to do with real beavers.  They are whole-wheat pastries which are hand-stretched to resemble a beaver's tail, then float-cooked and served piping hot, topped with butter and your choice of delectable flavours, which are:  Apple Cinnamon, Cinnamon & Sugar, Chocolate Hazelnut, Chocolate Banana, Chocolate & Peanut Butter with Reese's Peeses, Cocoa Vanilla, and Maplebutter.  You can get Hot Chocolate with marshmallows to warm you up or frozen yogurt for those who want to be extra cool. 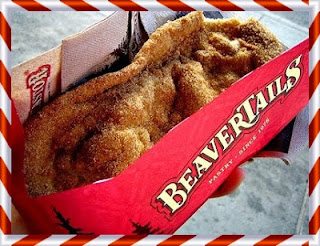 This is the standard Cinnamon & Sugar Beavertail. 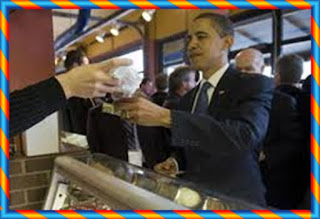 And here is President Obama about to taste one on his first trip to Ottawa. 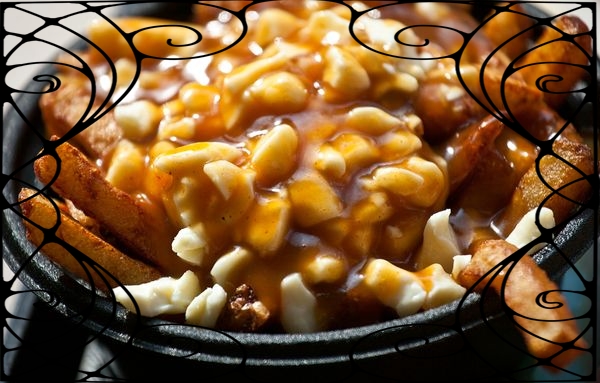 If you're in the mood for something more savoury, some of the food stands serve another Canadian deliCATcy -- or indeliCATcy, depending on how you think.  Poutine is pronounced like 'poot-in' without the actual fart.  This decadent dish originated in the Province of Quebec but has become something of a national guilty pleasure.

"In the basic recipe for poutine, French fries are covered with fresh cheese curds, and topped with brown gravy. In an authentic French-Canadian poutine:
Heavy beef or pork-based brown gravies are rarely used. To maintain the texture of the fries, the cheese curd and gravy are added immediately prior to serving the dish. The hot gravy is usually poured over the cold cheese curds, so that the cheese is warmed without completely melting. It is important to control the temperature, timing and the order in which the ingredients are added, so as to obtain the right mix of textures which is an essential part of the experience of eating poutine."

And if that isn't enough, Dante thought you should all have some PURRotein as well.  So last night he went out 'ice fishing' on the Ottawa River at Petrie Island which is one of the top spots in Eastern Ontario.   Luckily, Petrie Island is very close to where we live, so Dante didn't have far to travel. 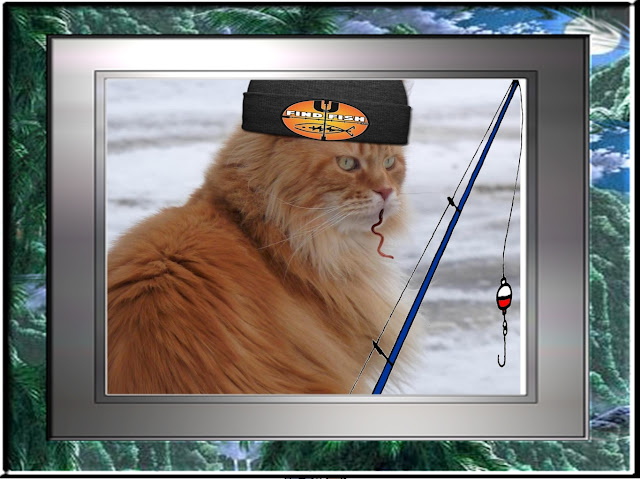 Indeed, Dante had opened a whole new can of worms!  And he even brought back some for you all to try.  Mmmmm, yummy!  Try them as a side to hot dogs, or bacon and eggs, instead of beans sometime. 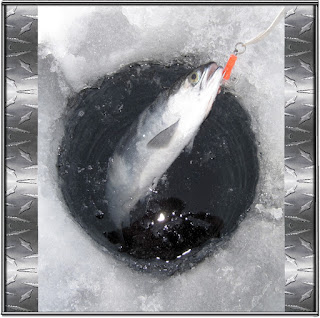 Dante put his catch in a bucket and brought them to the Rideau Canal as party fare.  (I'm sure the fish didn't think it was fair, but them's the breaks!)  So for those of you who like sushi, have at it!  Eat your fill. 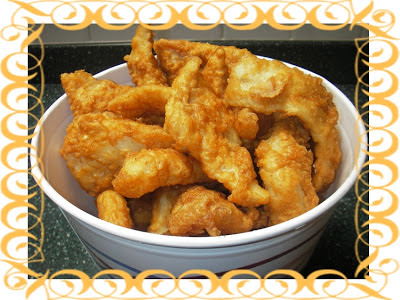 But for those of you who preFUR your fish a little crispier, here's a bucket of the fried stuff, too! 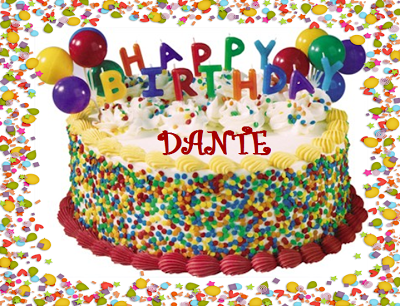 And of course, no birthday celebration would be complete without a birthday cake.  This is a Baskin-Robbins ICE cream cake, of course!  What other kind would you have at a skating PAWty? 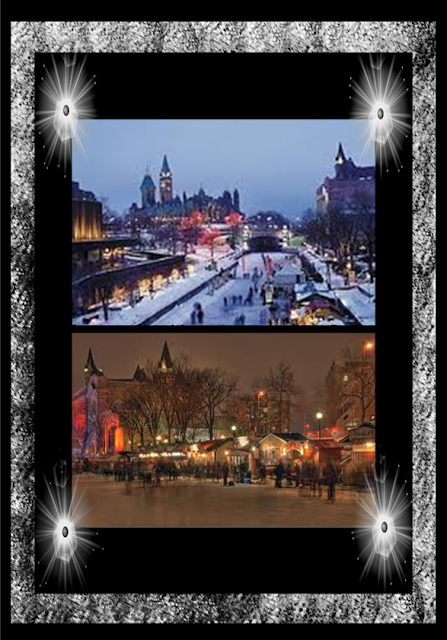 The day may have passed quickly but the party goes on into the night.  The canal doesn't close until 10 p.m.  so stay awhile!  You'll need to do quite a bit of actual skating to burn off all that rich food, though.

And as for Dante and Sascha, when it was time to leave the Skateway, they had a brief walk to their hotel.  You can see its turrets lit up in the last picture, above.  They meowandered along slowly to enjoy the crisp night air, and stopped to kiss under the lamplight before heading inside. 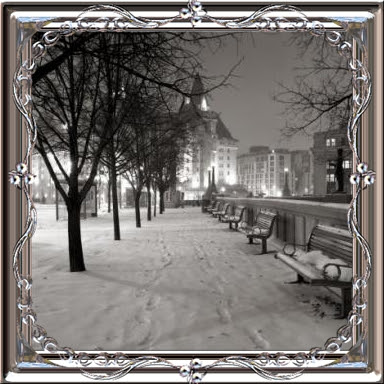 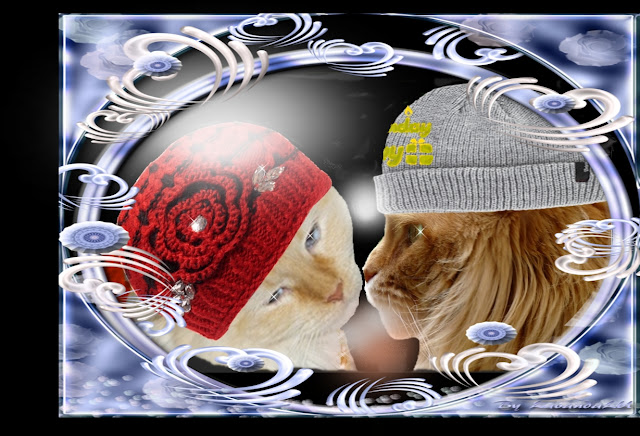 "There's nothin' I love more in this SWIRLED than you", said Dante just before their lips met.

And what happened next -- well, we'll just keep that on ICE!

Happy Birthday Dante! Looks like you had a grand old day, and here's wishing you 11 more!

Happy birthday Dante!!! Looks like a great time at your party!

Happy Birthday, Dante! What a wonderful BD with unique activities and foods for us Southern Belles!

Glad that you can rent ice skates , because I don´t have any :)
Pawsome party you are throwing !!

We'll pass on the poutine, and go for some fish...our human's coming along for a Beaver Tail. It's been years since she's had one, even though they sell them here on campus as occasional fundraisers.

Have a wonderful celebration!

Happy Birthday Dante, what a lovely pawty.. I love the food, not so keen on worms...Leave dem for the berd'z! Wez popped over from our buddie Brian :) xx00xx

Happy Birthday Dante! Sascha was soooooooo excited to spend this festive day with you!

Happy Purrthday, Dante! What a party!

Happy 11th Birthday! What a fun pawty! Hope I don't fall down on the ice!

Happy 11th Birthday Dante. I haven't skated since I was a kid. How fun.
Sue B

A very Happy Birthday to you Dante. What a fun party with ice skating and lots of great food. That food looks soooooooo good. Have a great day.

Wow, a skating party, what fun.

Happy Birthday, Dante! We know 2013 will be a great year for you and Sascha.

Happy Birthday Dante!!! Mom has been to Ottawa as she is 1/2 Canadian - her fmaily s from Quebec! She went in summer so did not get to skate on the canals but thought the city was lovely! So we know poutine!

Happy Birthday, Dante!!!
What a PARTY!!!
Have fun celebrating : )

Happy Birthday you Handsome Devil!
Your hu-mom has put together an awesomely amazing party for you, lucky boy!
Now we are off to savor a beavertail, mmm.

Happy Purrthday Dante! We, at our place, wish you all a super day and many more purringly purrfect years!
And thanks for the pawty! What a pawty it is! Love it!
Purrs

Our pal Brian sent us over! We hope you have a wonderful birthday, Dante!

Holy Cat! This is a fantastic party! HAPPY BIRTHDAY, DANTE! We hope you have a fantastic day, and wish you many, many more birthday celebrations. :)

What an amazing birthday party!! Lots of fun and good noms (well..maybe not the worms).

What an amazing birthday party!! Lots of fun and good noms (well..maybe not the worms).


Hmmmmm...it said Service Not Available when we hit publish. We'll try again and hope it's not a duplicate.

A very happy purrday Dante.
This is a wonderful way to celebrate with everyone!

Hi, Dante nice to meet you. We just came over from Brian's place to meet you and wish you a very Happy 11th Birthday! Hugs and nose kisses Chancy, Mumsy and Kitties

Happy Birthday Dante. You have a great party going here.

I wish you a Very Happy Birthday
Dante��
You are very handsome and Sasha is a lucky girl!
Here's to Many Many more Happy Birthdays!
Your recipes sound wonderful.
I like my fish fried and won't be eating worms anytime soon but am going to make the one with fries cheese and gravy.
Connie Marie

HAPPY BIRTHDAY DANTE YOU HANDSOME CAT
I WISH YOU MANY MORE WONDERFUL YEARS
WITH YOUR BEAUTIFUL SACHA.
LOVED THE RECIPIES ALSO, BUT WILL PASS ON THE WORMS!😍

Hi Dante, so nice to meet you! Brian the Cat sent me over. Your birthday party rocks! Happy birthday to you, hope you had a wonderful day!

May your day be filled with love & cuddles and treats & nip. Lots & lots of the nip!

Super Birthday Wishes Dante! You made me want to take a trip for the skating..Purring wildly here. Canada is the greatest!

Happy Birthday, Dante! This was a fab walk down memory lane for me as a Canadian born in Montreal. Thank-you!!!I don't miss the frozen fingers and toes but would love some poutine right now!

Happy Birthday, Dante!...I am having so much fun hanging out with Dylan and all your friends at this exciting party!...You and Sascha look so happy together; you two are a gorgeous couple and this is just a wonderful night!...xo...Halle

Happy Happy Birthday to you, Dante~~

Happy Birthday to you Dante!!!

We had a great time ice skating with you. So glad Mommy thought to tell us to tie pillows to our butts though. We are not used to ice.

Happy Birthday Dante! I hope you had a wonderful day!

Happy Birthday Dante! Here's to many more happy years too! What a beautiful place you live in. All the food sounds great, except the worms (which our mom is scairt of, so maybe we'll grab a couple extra before we leave). We've never been ice skating. Usually it is an indoor activity because it doesn't stay cold enough long enough here. Purrs, sweet furiend!

Happy Birthday dear Dante! Thanks for taking us to walk in your town, we love, especially those tasty fish for fish. Many cuddles friend!

Happy Purrthday Dante and what a celebration you have here. I was honored to be invited and with my 4 feets I stayed upright. Sort of. What a joy to be here at the celebration.

Skating on the canal sounds like a terrific time. This makes me want to go to Ottawa just to try it. I love ice skating, but rinks are boring, and I don't like shoveling ponds--besides, you are still going in circles. When my creek freezes and there isn't much snow on it, I love to skate there. A canal with food would be even better!

It's a great way to spend a birthday!

Happy Belated Birthday Dante! And many more...I'z got my jazz paws going for ya buddy! We loves ya and think you had an awesome party, sorry we missed it. Awesome post, you folks think of efurrything!