Today I have a couple of Dante videos for you.  I brought Dante out on the front porch for the first time since before Christmas.  We've had several weeks of unbearable cold and now there is a little respite, as the temPURRatures have climbed above freezing.  I thought Dante could really use some fresh air.  He, and the other 'D's' have been going stir crazy cooped up inside.

However, even with his Maine Coon coat, Dante wasn't too happy about it, and yowled to get in as soon as I shut the front door.  I put him on his chair and he stayed awhile, but still under protest.  If you've never heard a Maine Coon's vocals before, they are quite unusual.  Dante can go from sounding like a little kitten mewing to a deep guttural howl, and everything in-between.  Here, he is mainly yowling, though.

Are you ready for it?  Here we go.

Oh, and in case you think his fur looks choppy, it is.  I took the scissors to it to cut out some fairly big mats that just weren't brushable.

And here Dante does his nesting dance! 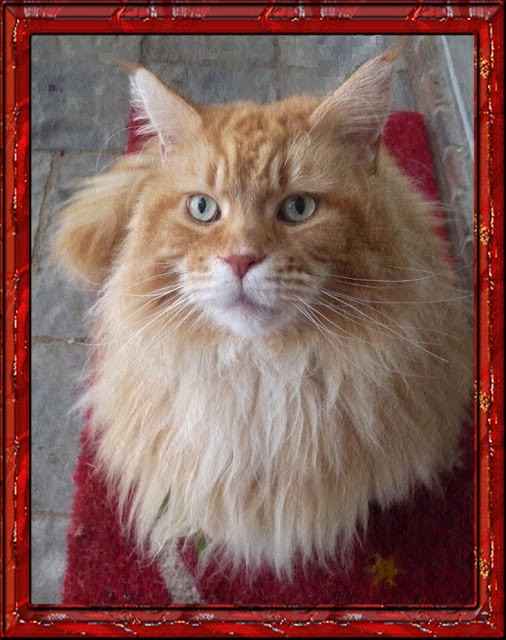 "Wot duzn't she unnerstand about da word 'IN'?  Is jus' not dat complicated!"

dai$y who bee part wegie, gets knots two... but if her beez brushed with de zoom groom just one a week....

Oh Dante, that was some good talking and the darn Mom didn't even listen and let you in. Bad Mom. Hope you didn't have to stay out there too long. Have a great day.

Dante, you were telling your Mom exactly what you wanted, and she just didn't want to listen! You certainly are quite a talker.

You have a great meow, Dante! I don't blame you for wanting in, brrrrrrr who wants to be out unless it's at least 70 out! MOL

It's NOT FAIR !!!!
Dante, I can't watch your video !
What happens is..Mom have notebook, and her notbook turn to Vegetable ! Can't upgrade because it's too old. But in general, we watch video on Ipad ( Ipuddy ) but today it said " It's not available in Safari !

Now what I can do is..Guess What ? MOL
Any way, I hope you have a fantastic day
xoxo

Me thoughts yous would like the cold!
Kisses
Nellie

Poor Dante as he complains! My cat was switching ears listening to your complaint.

Dante you are so handsome. Loved hearing you talking.
Sue B

Have you tried an undercoat rake on Dante? They work well on the fluffy undercoat.

That yowling sounds familiar. I hear it when Jenna is about to hack up a present for me ;)

We think Dante wasn't too happy with the cold!

Hi, Big Boy!
I don't go outside, except to go visit my favorite peoples at the vets. I've been lucky so far. No clumps. But my toenails are getting stuck on everything. (Time to go get hugged by the girls at the vets. They insist on weighing me, too. Doc says I am 1 pound too heavy!)
Mandu