CLOSE ENCOUNTERS OF THE SQUIRREL KIND! 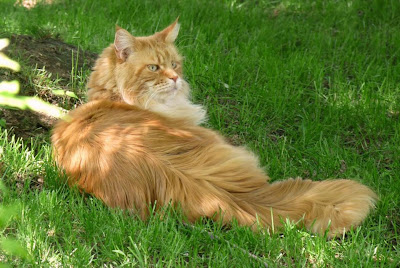 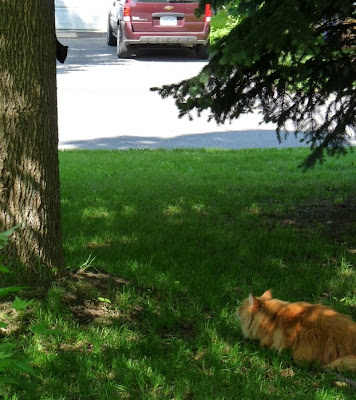 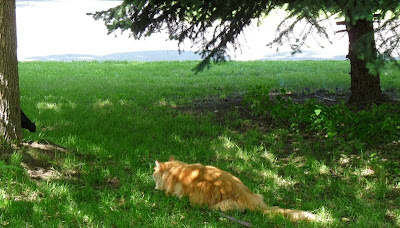 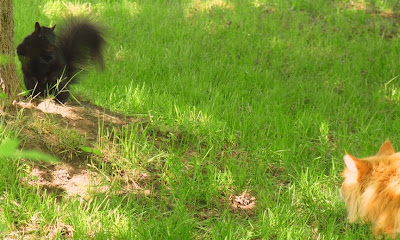 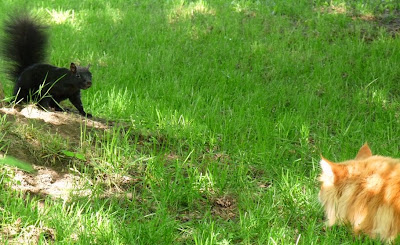 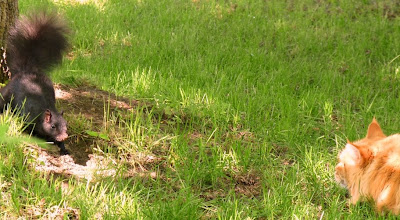 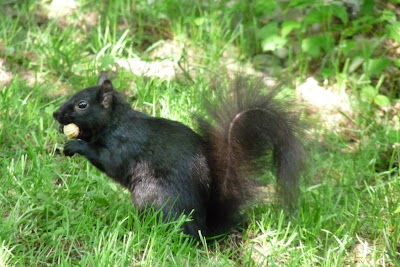 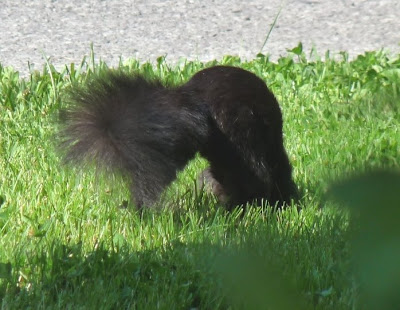 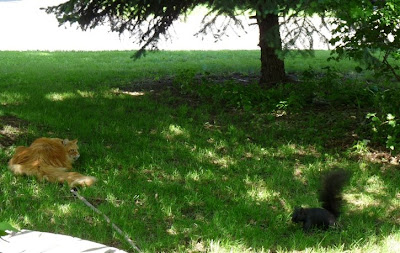 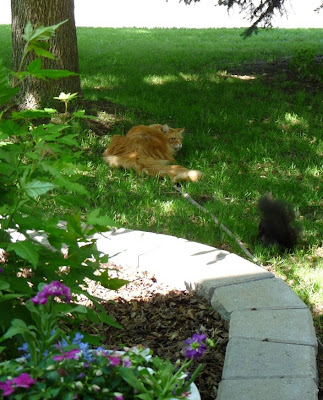 Close Encounter of the Third Kind 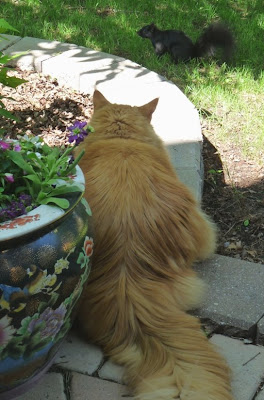 I was witness to this little ongoing drama in my front yard this morning. Dante was on leash, but with a 40-ft. lead which provides sufficient space for stalking. We have a resident squirrel who lives in the spruce tree which borders our purroperty and our neighbour's. This is not an evil squirrel like ones we have encountered before. This is a mama squirrel who is only trying to forage for food to feed her babies.

Ms. Squirrel is a cheeky little thing, though, and quite daring at that. She doesn't seem purrticularly threatened by the feline purresence. She is more interested in getting her message across to me, that I need to fetch nuts -- and now!

She will come quite close and look me directly in the eye, and wait (not so patiently) until I return with what she treasures most.

So, I scattered a handful of peanuts (in the shell) after which she busily hopped around gathering them one by one -- keeping one eye on Dante, but determined to collect them all. You can see how close she comes to Dante a number of times. On this occasion Dante did rise to the bait (so to speak) and gave chase, but luckily Ms. Squirrel is lighter and faster and easily escaped -- only to find a spot at the edge of the drive where she buried her newly acquired booty. (Actually, there's a nice booty shot of her burying it, there.)

Finally, Ms. Squirrel had enough for the day and she retired to her tree house for a little R&R and some quality time with her little ones.

Dante was left to ponder the one that got away (again)!
Posted by CCL Wendy at 8:16 PM

Dat is really cool. How nice dat it was all caught wiff da camera.

Lovely story and pics. We enjoyed it.

Oh, we will just spend all day here, looking at these. All day.

What fantastic pictures! The drama!!! That squirrel was very brave!

What a brave squirrel she is. We liked the photos of her teasing Dante. They made us drool.

Funny! We don't have those velvety black squirells where I live.

Wow! That squirrel is brave! We cannot believe how close she gets to Dante! We're not sure we would have been so patient like Dante...we woulda chased her for sure!

What an amazing series of pictures!
We've never seen a black squirrel! We have only (mostly) gray squirrels and some smaller red ones and also an albino in the neighborhood. They are all very saucy & quite rude!
Dante, you were doing an excellent stalking job!

I love that black squirrel... they are so different FURom the squirrely FURiends we R FURmiliar with in these parts... WNY!

What a tease, that squirrel is!
Susan

Cute one! We don't have squirrels here. SS misses them - they used to come right into her living room when she was living in the UK. Dante is beautiful.