There was actually some sunshine out there today!  We've had more than a week of solid gray skies, even though the temperatures have been somewhat warmer.

So, Dante took advantage of the nicer weather to go for a walk in the snow.  I don't bother to leash him in the winter because the snow generally keeps him hemmed in, but I do keep a close watch in case he needs to be herded back home.

My friend, Susan, from across the street was visiting with us outside, and while I was filming this little video of Dante's snow trek, she headed next door to try to head him off at the pass (so to speak).  Dante got no further than the edge of our neighbour's driveway when he turned back on his own.

I must tell you, that for the most part, Dante will actually listen to me.  When I say "Dante, be a good boy", he knows that I want him to stay close to home.  If he does ignore me, then I put on my loud, angry voice, and it usually chastens, as well as hastens him home.  He really responds to the positive reinforcement of praise.  I have also heard him whimper when he knows I'm upset with him for doing something he shouldn't.  And it's all just from a change in my voice!

Anyway, here's the link to the short video -- another talkie, I'm afraid!  Just click on the following.

Dante goes where no cat has gone before!  (At least not this winter.)

As an extra added bonus, here are three more pictures of Dante, Snow Cat, just because they're beautiful.  His fur is looking even redder against the whiteness of the snow lately.  I think actually when it's a bit overcast, the colours don't get washed out like they do when there's too much sun. 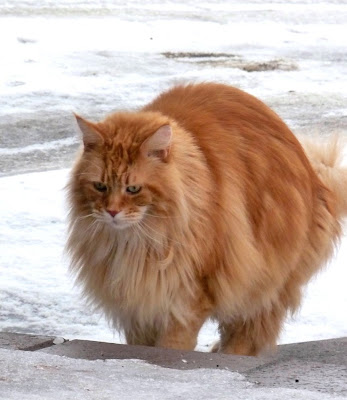 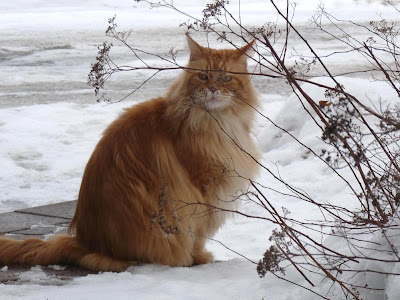 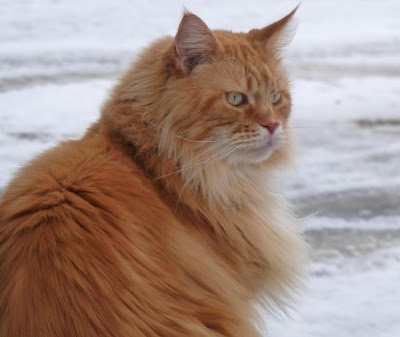 So from the frozen sub-Arctic tundra of suburban Ottawa, Dante wishes you farewell for the nonce!  There will surely be another Snow Trek episode in the not too distant future.   Snow Trek, the Seequel!  You'll just have to wait and see!

Dante you are such a gorgeous big floofy boy!

Dante you look great in the snow! And I am always impressed with how brave you are to wander around in the snow!

date your floof is amazing!

Whoa...boldly going where no cat has gone before!

I love the way he does that shakey thing with his hind paws- makes me chilly just looking at him! That Dante is just plain COOL!!!

We love how you stroll casually back as if that was your idea!

Wow Dante you guys have a lot of snow! How brave to go out in it. Our Om wanted to say she is glad there are so many nice beans named Albert out there. Our Al was named after Albert Einstein cuz they both have such wild crazy white hair!

Love the video and the pictures are priceless! You sure are furry handsome!

Miss Camille Suzanne will be mentioning Dante in her Friday bloggy. He'll have to come see☺

Ah, that is where all our snow has gone. Now we see how you enjoy it, you are very welcome to it, Dante. In fact: if we get any more, we will send it to you, so you don't run out.

We love watching you in the snow, Dante!

I swoon yet again at the sight of Dante. Sigh...

Dante looks so dignified in the snow, espcially in that last picture!

You look glorious, Dante. As always, one might have to add. We met a young red Maine Coon at the vet today but he was nowhere near as floofy as you are. Our snow is gone already, it's always only a short episode here where we live.
Purrs, Siena Snowfox

Dante, you is the abomidable snow cat!