THE SEVENTH DAY OF CHRISTMAS WITH DANTE & SASCHA

NOTE:  Today's post contains another history lesson, so if you find such things interesting, please take a close look.

On the Seventh Day of Christmas, Dante's true love gave to him ... 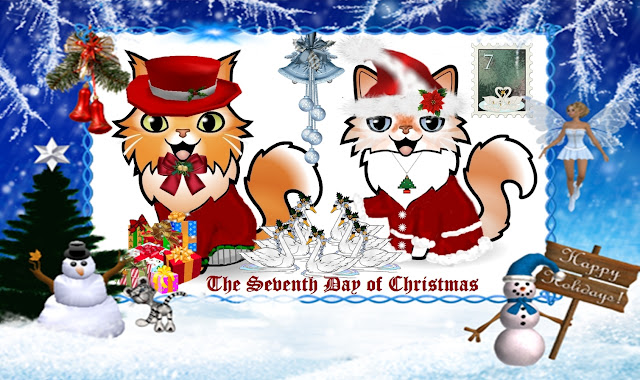 Dante was truly overwhelmed by this gift, and once again, wasn't quite sure what to do with them.  He had never even heard of anyone cooking a swan!  Somehow, it didn't seem quite right.

So he did some more investiCATing on the internet, and it turns out that it was quite common in Medieval times.  He even found copies of old Elizabethan recipes, crude though they may be.

While he was at it, he did a little geneological research, and dug up some information on one of his medieval ancestors, and one of Sascha's as well.  He was beginning to think that he and Sascha had been together in previous lives because several of their respective ancestors seemed to know each other!

PURRhaps they belonged together for all time.  It sure was starting to look that way.

Dante found likenesses of his and Sascha's medieval ancestors in an early Elizabethan engraving.  (Note:  Their names are 100 purr cent authentic to the times.  Rather ironic, I think.) 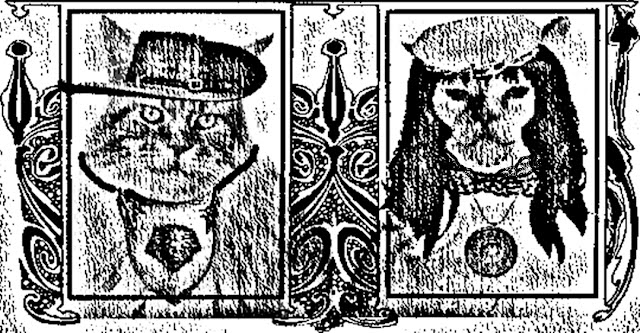 It really makes you wonder if their ancestors actually swanned around together, and maybe even partook of a little roasted swan for dinner.

Hereunder is a representation of a roast swan and an authentic Medieval Swan Recipe.  The Old English word for recipe is "receipt".  The receipt itself is written in Medieval English and is followed by a translation in modern English. 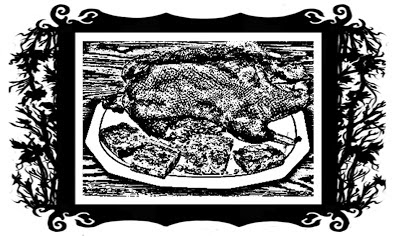 For to prepare a swan. Take & undo him & wash him, & do on a spit & lard him fair & roast him well; & dismember him on the best manner & make a fair carving, & the sauce thereto shall be made in this manner, & it is called:

Chaudon. Take the issue of the swan & wash it well, & scour the guts well with salt, & boil the issue all together til it be enough, & then take it up and wash it well & hew it small, & take bread & powder of ginger & of galingale & grind together & temper it with the broth, & color it with the blood. And when it is boiled & ground & strained, salt it, & boil it well together in a small pot & season it with a little vinegar.


While Dante found his hiss-tory lesson very interesting (swans do hiss, after all), he wasn't exactly burning to recreate the recipe (er receipt).  But now that he was actually in receipt of the swans, he had to find something to do with them.  Then it suddenly hit him!

"I'll make a pond for them in my new garden in the Spring", he said, "but in the meantime I'll make arrangements for them to live at "Swan House" in Ottawa during the winter."

Dante lives in Ottawa which is known as 'Swan Central' by some, because in 1967, Her Majesty Queen Elizabeth II gifted the City of Ottawa, Canada's capital, with six pairs of Mute (Royal) swans. Her Majesty's gift was in celebration of Canada's 100th birthday.

The swans are housed in a nursery during the cold weather and released onto the Rideau River in May of each year.  We are pretty sure that it's actually illegal to eat one, so Dante made a very good decision -- again with Sascha's approval.

Join us again tomorrow for "The Eighth Day of Christmas with Dante & Sascha".  It's definitely time for something a little different.

I've learnt alot from these posts and this song. Its so interesting to really look at something you have heard all your life but never thought about in great detail. It's the best kind of history lesson you can have because it's part of your life today and yet relates back to what is turning out to be a very long time ago! Next time I hear this Christmas song I'm going to have a whole lot to say about it :)

We all love those beautiful swans and our beautiful couple!

Yup, these are some good lessons in all the words to the song. Don't think we would want to eat a swan. They are way too pretty. HOpe all of you have a great day.

we couldna let this pass :)

I think it's a good think you didn't eat them.. they're much prettier to look at!

ewwwww...not eating swan, not no way, no how...ununah...floating on a pond to make them into some swan TV, now that is nice! just sayin'Savannah

We think the swans will make a beautiful contribution to your new pond.

Mummy and me both think a pond is a great idea

Thank you for the history lesson it was most interesting and we are so glad you didn't eat the swans. We wish we had swans visit our pond as well as Canadian Geese, cause we thinks swans are very purrty.