THE TENTH DAY OF CHRISTMAS WITH DANTE & SASCHA

On the Tenth Day of Christmas, Dante's true love gave to him ... 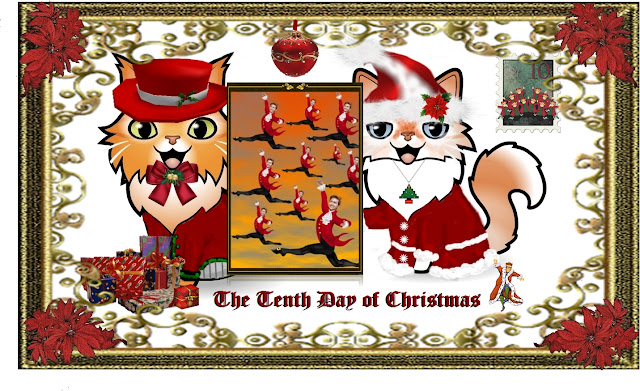 When Dante saw all these grown men leaping towards him he was a little taken aback to say the least.  "Oh Lord", he said "What have I done to deserve this?"  He wanted to tell them to take a 'flying leap', but it was a little redundant.
He rushed to protect Sascha from getting struck by flying feet, and asked her what she could possibly be thinking.  These lordly lunatics just couldn't stand still.  They were beginning to make him feel dizzy.

"I know", said Sascha.  "Maybe we could lasso them like cattle and then hog-tie 'em!"  Indeed these ten not-so-little piggies required something to bring them down to earth.  "It sure would be great to harness all that energy!"

"Actually, that's not such a bad idea", said Dante.  "Let them leap, I say!  It's better than locking them up and only bringing them out every Leap Year.  But if they're going to leap, they shall leap with a PURRpose.  I think they are PURRfectly suited to the stageshow "Riverdance".  I can be their agent, and make a little money on the side.  It's a win-win situation!"

So Dante booked the ten lords with the "Riverdance" company that very day.  They were so happy to have them, they didn't even ask them to audition.  "It certainly has improved our show by leaps and bounds", said they.

Dante and Sascha attended the evening PURRformance.  It was so much better when the leaping was contained just to the stage.  It didn't feel so out-of control anymore.  And the lords were all very happy, and thrilled to have Dante as their agent, because now they would get paid for doing what they loved to do best. 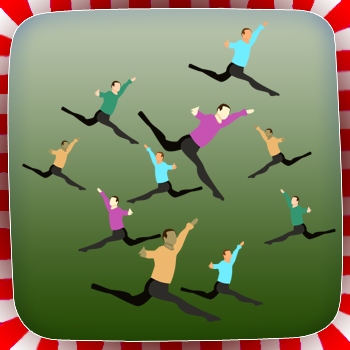 Dante was proud when he saw HIS ten lords on stage.  Never mind the moon landing -- this was TEN giant leaps for mankind!

And they fit right in with all of the other PURRformers.  See! 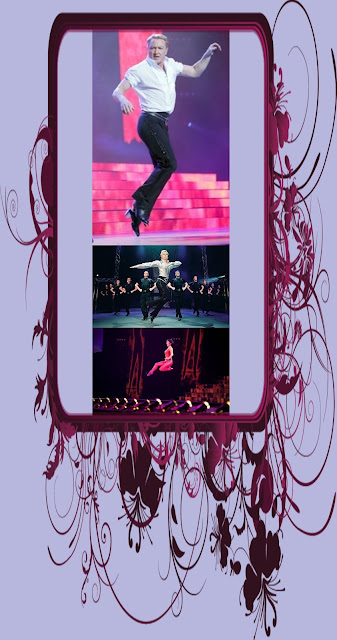 So, once again everything has worked out marvelously.  Sascha and Dante have opened their own theatrical agency.  They named it after their Elizabethan ancestors, SimaCATTA and DemoCOÖN, by combining parts of both names.  And here is their business card.

They wanted to come off as snazzy and sophistiCATed.  Do you think they have succeeded?

So what started off as being something rather frightening, actually turned into something quite intriguing.  Not to mention that Sascha and Dante both scored new jobs as entrePURRneurs!

Things just seem to be getting better and better for these two.  Will the trend continue?  You'll have to return for "The Eleventh Day of Christmas with Dante & Sascha" tomorrow, if you want to find out.

Oh Sascha and Dante, you two are just so smart to figure out what to do with those leaping, jumping peoples. Glad you got all that figured out. Be sure to have some fun today.

turned out to be a job well done!merry christmas!

The tenth day was out of this world!. Can't wait to see what comes next. Purrs.

put 'em on Dancing With The Stars!

Oh my, those theatrical agents are terrific!!!

Sascha and Dante are Purrfect foils to those leaping men..lol.

I love your business card..stunning and vibrant as always..heh heh.

WOW!!! You kitties are so cool and now you have your own business :o
Purrfect!
Purrs Tillie and Georgia,
Tiger,Treasure,JJ and Julie

Wow, what cool ancestors. Glad your lords are with Riverdance!
I absolutely could watch them 24 hours a day!!! Congratulations!